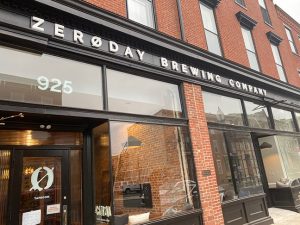 Zeroday Brewing Co. is set to open its taproom and restaurant in Harrisburg next week.

It’s looking like a nice weekend to get out and enjoy Harrisburg! With temperatures expected to moderate, it may be a good time to throw on an extra layer and enjoy some outdoor dining. Before you head out, catch up on our reporting from this week, listed and linked, below.

The Crowne Plaza hotel in Harrisburg caught fire on Monday, but minimal damage was caused, our reporting found. According to Fire Chief Brian Enterline, the fire started in the hotel’s blind shaft, a brick duct that runs from the basement to the top floor and contains utility pipes.

The eviction moratorium in Harrisburg was extended for another 30 days, through mid-April, according to our online story. The city initially enacted the declaration in December to protest residents struggling to pay rent during the pandemic.

Gov. Tom Wolf announced that COVID-19 restrictions would be loosened for restaurants, bars and other businesses. Starting April 4, restaurants may resume bar service, and alcohol service will be allowed without the purchase of food.

Harrisburg may soon take one of the final steps toward leaving Act 47, our online story reported. Harrisburg City Council members discussed a final piece of the city’s years-long recovery plan, the creation of a special trust to oversee certain post-employment benefits for retired city union workers.

Harrisburg’s Irish history is well hidden, but our writer found pieces of it at Mount Calvary Cemetery and in other places around the city. What she discovered were stories of heroism, humanity and hope.

The Harrisburg Symphony Orchestra will take the stage for its 90th-anniversary celebration this weekend, our online story reported. Viewers can experience the concert virtually through an online performance. You also can enjoy a lengthy “Conversation” with Maestro Stuart Malina, who was interviewed by our own Karen Hendricks.

Isabelle’s Southern Cuisine is set to open this weekend in Midtown Harrisburg, our online story reported. Owner Kim Ross hopes to continue her grandmother’s legacy and share her family’s soul food recipes with the community.

Protests at the PA state Capitol have had a unique impact on residents in the surrounding neighborhoods this past year, our magazine story reported. With a few rallies spilling into residential areas, some community members experienced fear and frustration.

Sara Bozich has some late St. Patty’s Day events for you this weekend, in case you haven’t celebrated already–or maybe if you have. Her list also includes some shop local suggestions. Don’t miss out!

UPMC Pinnacle’s Nurse Family Partnership program lends a hand to first-time mothers through coaching and mentorship. Our magazine article tells the story of Allison Pierre, a young mom who completed the program.