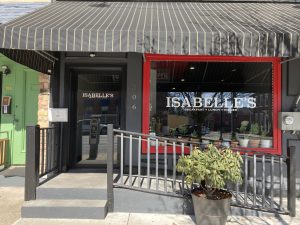 As a little girl, Kim Ross remembers spending days with her grandmother, Isabelle Ross, cooking in her kitchen in the William Howard Day Homes in Harrisburg.

Ross’s grandma was losing her eyesight and wanted to pass on her family recipes. It was a great bonding time for the pair, Ross said.

Now, she plans to share those meals with the Harrisburg community at a new southern food restaurant coming to Reily Street in Midtown, the former location of the Red Boat Asian Fusion restaurant.

Isabelle’s Southern Cuisine plans to open this Sunday for brunch, which will be a regular weekend event. Ross said that they have already sold out the first brunch.

Throughout the week, Isabelle’s will serve breakfast, lunch and, on some days, dinner. Ross said that the menu will include soul food staples like chicken and waffles, shrimp and grits, mac and cheese and candied sweet potatoes. They also plan to serve Fifth Acres Coffee, a Harrisburg company owned by Stefan Hawkins of Good Brotha’s Book Café, also in Midtown.

“Isabelle’s will be a great addition to an already growing restaurant community,” Hawkins said. “I know the owners, and I know the love and care they’ll put into bringing quality food to this community.”

Ross hopes that the restaurant will have a familial feel, especially since it will be a family-run operation. Ross will handle the sides, her brothers and son will tackle the main dishes and her cousin, a baker, will take on desserts.

Her son added his touch to the décor of the restaurant to create a modern, urban feel with trendy faux grass walls and neon signs, Ross said.

“I’m excited to see our family work together,” she said. “This is something new for us, but it’s pulling us closer together.”

She’s had many family members to look up to who owned local businesses, but Ross hadn’t considered owning one herself until her son encouraged her to open. He saw the potential she had. She said that she always had friends coming over to eat her food, and the family made Sunday dinners together a priority.

This winter wasn’t easy for Ross’s family as both an uncle and her mother passed away, but she sees the restaurant as a way to move forward with a new chapter. Even the COVID-19 pandemic isn’t stopping her.

“This is a new beginning for our family,” she said.