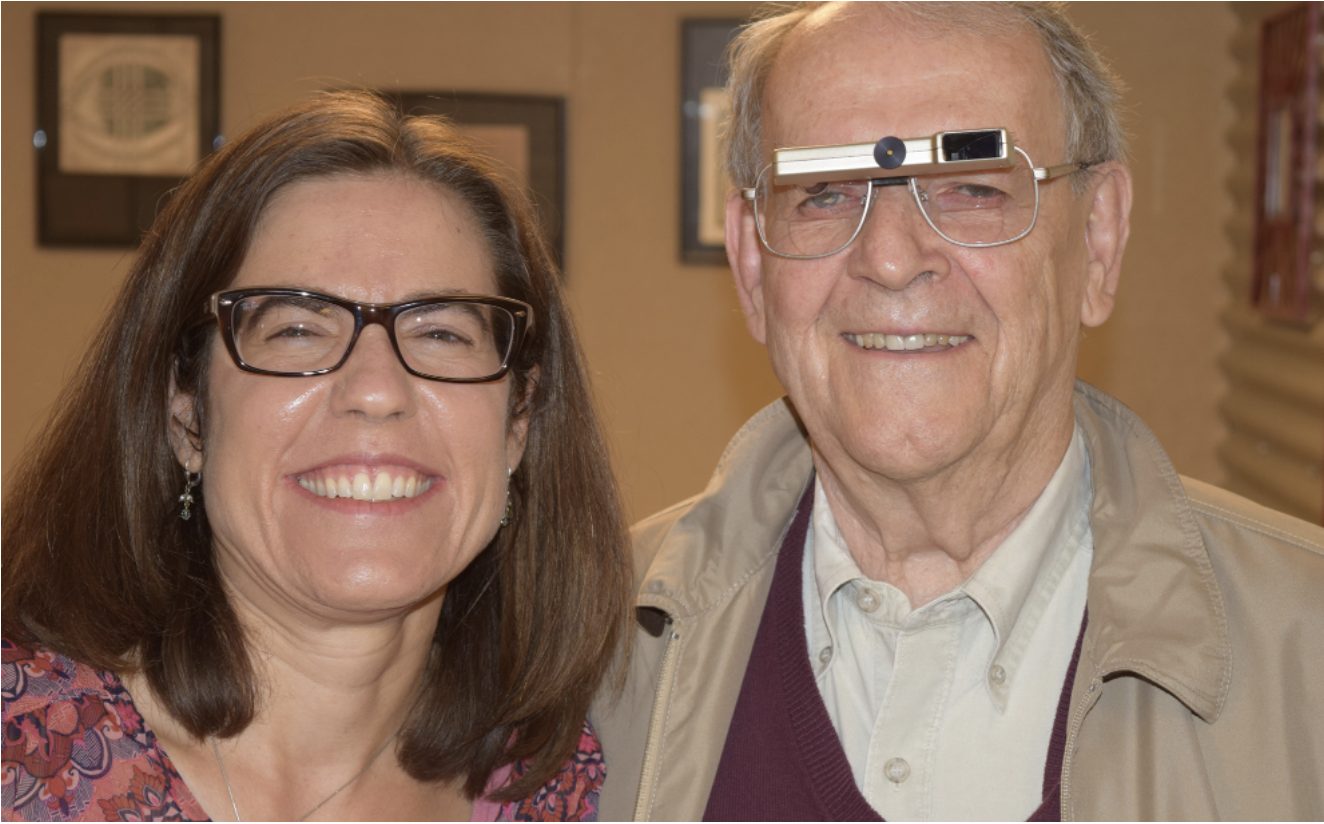 Vision Rehab Center doctor, Dr. Bourdeau, with a low vision client, with a new technology device mounted to his glasses allowing him greater quality of vision.

At the age of 67, Dr. Wesley Britton of Harrisburg is grateful for his “Get Off the Couch Club.”

Does it change your perception of Britton or club members, to learn that they’re visually impaired—or in Britton’s case, blind?

“The number-one thing for a lot of people when they see a disability, they zoom in on that—you’re instantly defined by that disability,” Britton said. “And everybody seems to be amazed that you can accomplish day-to-day things like doing the laundry or dishes… we’re not superheroes.”

Britton has indeed accomplished a lot, including a PhD, teaching in college classrooms for 33 years and writing numerous books. But he admits he spent several years of his life “ticked off,” going in and out of “rages and self-pity.” A genetic condition caused him to gradually lose his vision through his 20s.

Although he lost his eyesight, he gained insights to share—that’s why he served on Vision Resources of Central Pennsylvania’s (VROCP) board for 14 years, including two as president.

Their “Get Off the Couch Club” helps him get out the door, but it’s another VROCP service that dramatically impacts his time at home: computer access technology.

“Without any question, it’s the most incredible advancement I’ve experienced,” Britton said. “Speech software in computers allows me to email, be online, do anything on the computer—that technology has opened up everything.”

Perceptions and technology have come a long way since VROCP was founded exactly 100 years ago in March of 1921.

“Our organization has been through World War II, helping take beggars off the streets of downtown Harrisburg—that’s how the blind were living back then. Our organization provided jobs so they didn’t have to beg,” said Danette Blank, executive director.

To this day, VROCP not only provides services through caseworkers and ever-improving technology, but business—via employment—as well.

“I love the combination—providing employment for people with disabilities, which provides 80% of our income,” said Blank.

An annual budget of $4 million relies on very little government funding—only a small amount of state money. Grants and donations add to the coffers. Blank is proud of the fact that 91 cents of every dollar the nonprofit takes in goes toward services.

VROCP began as a member agency of the Pennsylvania Association for the Blind for Dauphin County, and over the years, it expanded to a 2,400-square-mile service area encompassing Cumberland, Perry and Franklin counties. In addition to serving the blind, VROCP assists people affected by four major eye diseases: macular degeneration, diabetic retinopathy, cataracts and glaucoma.

“We touch the lives of about 14,000 people annually,” said Blank. “We believe about 1% of the population is blind and visually impaired—but it’s very hard to find those statistics. A lot of people don’t want to be categorized as blind or visually impaired.”

Blank and her colleagues acknowledge that it’s been difficult to plan a yearlong, 100th anniversary celebration amid COVID-19, but it kicks off this month.

“Not many businesses or organizations make it to the 100-year mark,” said Blank. “We want to celebrate 100 years of being in the community, to share successes and history.”

One of the highlights is a May 19 gala planned for Harmony Hall, a spacious venue that allows the flexibility of either indoor or outdoor gatherings.

“We’re hoping, by then, to be one of the first activities people would like to share in,” Blank said.

During her 20 years with the organization, she’s seen the impact that VROCP’s services have on clients’ lives. She witnessed a woman crying because technology allowed her to see a photo of her grandchildren—a sight she never thought possible. A Harrisburg-area attorney with sudden vision loss was able to continue his career through VROCP’s emergency services.

“Even small impacts are very rewarding—like helping people receive a new pair of glasses at our eye clinic,” said Blank. “Those are the little things that get you up in the morning.”

Eye on the Future

Prevention of vision loss, through regular eye exams, is just as important as treatment. VROCP’s on-site clinic provides exams to the under- and uninsured. Their low vision rehab center treats those battling eye diseases. And during the last fiscal year, VROCP provided more than 4,000 free eye screenings for preschoolers.

“As we move into our next century of service, we’re trying to set ourselves up for the funding and needs we’re going to have,” said Paul Zavinsky, VROCP’s development director. “People are living longer, so the elderly population is growing, and that is when most people deal with vision problems.”

Audio services are one of the longest continuous services available through VROCP.

“Back in the ‘20s when radios were expensive, donations were made to the blind association so that we could purchase radios for the blind, so they could listen to the news,” Zavinsky said. “That evolved into reading services… reel-to-reel tape recorders… then low-power radio in the Harrisburg area in 1984.”

That service continues today—except it’s grown from a 30-mile radio tower radius to a worldwide audience, via digital streaming services on VROCPs website.

During the last fiscal year, 123 volunteers donated more than 3,200 hours to the nonprofit. About 40 of those volunteers spent more than 2,000 hours reading all types of news, online.

Glancing through the schedule, listeners can hear books, grocery store ads, health and local news. And if you tune in on Fridays, between noon and 12:30 p.m., you’ll even hear stories from the pages of TheBurg.

Vision Resources of Central Pennsylvania is located just off Paxton Street, at 1130 S. 19th St., Harrisburg. To learn more about the services offered through VROCP, as well as the organization’s anniversary events, see vrocp.org.