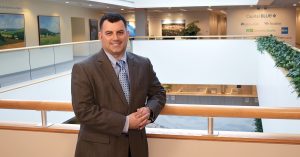 For more than 80 years, Capital Blue Cross has provided peace of mind to individuals and families in the greater Harrisburg region and across central Pennsylvania by offering products and services that help create healthier lives and lower healthcare costs.

We remain the only health insurer headquartered in Central Pennsylvania. Harrisburg has been central to our growth and success since we first opened our doors at the corner of Second and Locust streets in 1938. Today, we employ nearly 2,000 people in the Harrisburg region, many of whom call the city home. Capital Blue Cross is actively involved in promoting the health, education, arts and culture, and overall well-being of the city’s residents.

Our contributions to the city include:

This is just a sampling of our work in support of Harrisburg and its residents. Over the years, we have donated millions of dollars to support countless events and organizations in and around the capital city, and we will continue to support the community we call home.

During the COVID-19 pandemic, we increased our funding to local food banks and other community organizations, as well as provided meals to local healthcare workers, first responders, and nursing home staff and residents. Recognizing the financial strain the pandemic put on many households, we also waived several healthcare fees – such as copays, coinsurance, and deductibles – for our members.

Capital Blue Cross has an unwavering commitment to promoting health and wellness for our members, as well as promoting well-being and a strong quality of life for the City of Harrisburg and all the communities we serve. We have never forgotten our roots in Harrisburg, and Capital Blue Cross will continue to be an active participant in the city’s vibrant growth and continued success.