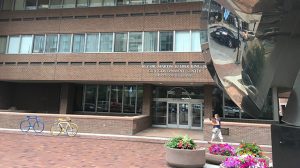 Harrisburg is weighing creating a trust to help pay for retiree benefits, one of the last steps on its long road to exiting Act 47.

“This has been a long time in the making,” city Solicitor Neil Grover said during the virtual work session. “It’s a concept that is promoted as a good financial tool for municipalities to recognize longtime obligations that they have to retirees and their families.”

Setting up a trust was approved by the Commonwealth Court in 2013 as part of the “Harrisburg Strong” financial recovery plan.

If approved by Harrisburg City Council, the OPEB Trust Fund would handle funds to supplement healthcare benefits that Harrisburg already provides retirees, acting independently of the city government. The trust would start with about $3.3 million from the city, which Grover said is far under the amount that would be needed to fund the other post-employment benefits long-term. The trust will be tasked with determining a way to build up additional funds, he said.

Grover said that the trust would be empowered to decide what type of healthcare items to cover, such as offsetting co-pays or paying for prescriptions or catastrophic events.

Harrisburg could contribute money to the OPEB Trust Fund, but due to the autonomy of the board, the city could not take funds from it.

Overall, the creation of the board would allow for a “backstop,” as Grover explained when reached by phone on Wednesday, thus supplementing the city’s already substantial retiree obligations.

The board would be made up of nine members, one from each of the city’s three unions, two appointed by City Council, two by the mayor and two by the state-appointed recovery coordinator for the city.

Council likely will vote on the ordinance at its next legislative session on Tuesday. From there, council would need to pass a resolution to enter into a trust agreement so that the OPEB Trust board could form.

The creation of the trust will be added into the city’s application to finally exit Act 47 after 11 years in the state’s program for financially distressed municipalities. According to Harrisburg officials, this is one of the final steps that the city has to undertake before leaving the program.

Also on the council docket for next week is a resolution to support the formation of a new joint transportation authority combining Harrisburg-based Capital Area Transit (CAT) and York-based rabbittransit. The merger would seek to regionalize transportation by creating the Susquehanna Regional Transportation Authority, offering a single fare payment system for users and improved connections for riders, Richard Farr, executive director of rabbitttransit, explained.

City Council will likely vote on this on Tuesday, as well.

Farr said that Adams and Dauphin counties have passed their resolutions to support the regional authority. York and Cumberland counties will vote in the coming weeks.

“Things continue to go very positively moving forward and things seem to be on track,” he said.