The Harrisburg Symphony Orchestra on stage at The Forum in 2019

When the Harrisburg Symphony Orchestra (HSO) takes the stage for their 90th birthday concert this Saturday, there will be striking differences compared to their inaugural March 1931 performance.

For starters, this weekend’s concert will take place virtually and be available for live-streaming directly into patrons’ living rooms—something that would have sounded completely foreign in 1931.

But there’s actually a common theme linking the two performances, beyond the music itself.

“We know we’re living under [pandemic] duress, but we need to remember what a bold decision it was for people to come together in Harrisburg and form an orchestra starting from zero dollars and zero funding,” said Matthew Herren, HSO executive director. “It was a big undertaking, and we honor their vision.”

The HSO has overcome many challenges in its 90 years including navigating its current “A Season Like No Other” via online performances. What began as a community orchestra featuring amateur Harrisburg musicians in 1931, morphed into a semi-professional organization, then blossomed into its current status as a fully professional orchestra.

The original Harrisburg Symphony Orchestra in 1931

“When we’re talking about an orchestra in a smallish city, it’s an extraordinary accomplishment to get to 90 years,” said Maestro Stuart Malina, HSO music director and conductor. “And when you get to the level of the HSO, the differential in artistic quality between us and the best orchestras in the world is really very small.”

Malina reflects on his musical childhood, family and fate that directed his steps toward the HSO—after he nearly followed in his father’s footsteps and became a lawyer—including his 20 years in Harrisburg, in the HSO’s March edition of their monthly “Conversations with the Maestro” YouTube series. The video is being released the evening of March 18, as a pre-cursor to this weekend’s celebratory online concert.

“When I first came to Harrisburg, I knew it was the capital—that was about all I knew about Harrisburg,” said Malina. “But the geographical location affords us major market players—that’s why I’ve stayed here so long… and on certain days, the Susquehanna River is the prettiest place in the world.”

He performs two piano pieces in the video—including a duet with his 18-year old son. Pandemic-era “exercises in creativity” such as online performances, and the HSO’s future, are also topics he touches upon.

The last time the HSO performed for a live audience was March 1, 2020 at the Forum. Since October, the HSO has recorded and streamed six performances with four more in the works, according to Herren.

“We quickly shifted to online performance, and thanks to the generosity of the Whitaker Center we’ve been recording performances there for streaming on demand,” Herren said. “What we’ve proven to ourselves is that we’re more nimble than we thought.”

Pre-pandemic live performances typically attracted an audience between 1,000 and 1,700. Pandemic-era, pre-recorded online performances have been garnering ticket sales from 500 to 800 households. That translates into a steady audience, across a pandemic speed bump, if you calculate at least two people per household.

The program blends classical music’s past and present: It opens with James Stephenson’s “Fanfare for Democracy” composed for President Biden’s inauguration, and it pays homage to the orchestra’s 1931 debut concert program by including “Two Slavonic Dances,” by Bohemian composer Antonín Dvořák. 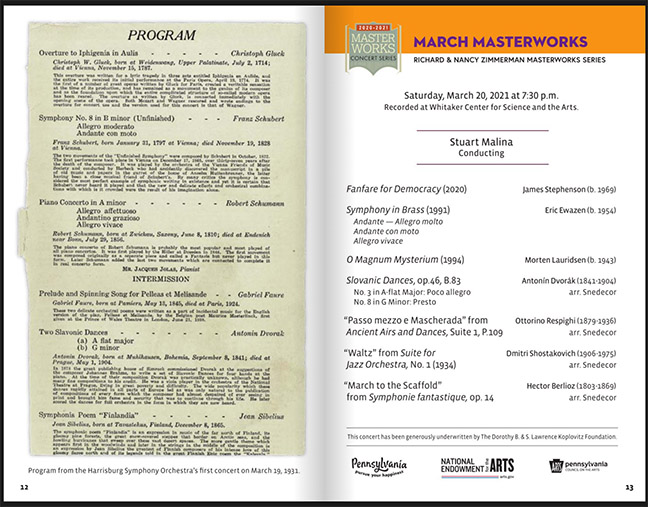 “The orchestra’s level is probably the highest it’s ever been, professionally,” said Concertmaster Peter Sirotin, who has played violin with the HSO for 25 years. “It’s a joy to watch this orchestra grow into a Pennsylvania institution—a premier cultural organization… with a level of culture and morale and camaraderie that’s hard to find.”

Following the remainder of the season’s online programming, the HSO’s traditional, free outdoor summer concerts as well as the 2021-22 season remain a question mark for now.

“We have a schedule and intentions, but we will not publicly promote events until we know we can safely have the musicians on stage,” said Gloria Giambalvo, HSO marketing director.

She encourages the public to continue checking the HSO’s website and social media for announcements.

“We’re all dying to think about and talk about the summer, but we’re resisting,” said Giambalvo. “We don’t want to offer hope for something that may not happen as we initially intended. We’ve been open and honest with our patrons, and they respect that.”

The HSO’s YouTube Conversation with the Maestro, hosted by our very own Karen Hendricks of TheBurg Podcast, is linked here. HSO staff, as well as Hendricks, will be interacting and answering viewers’ questions live on YouTube, Thursday, March 18, 6-7:30 p.m.

For more information on the HSO including the 90th birthday concert, see harrisburgsymphony.org.