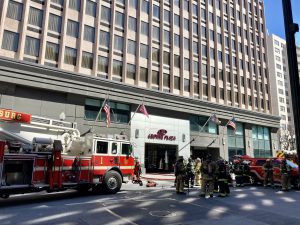 Firefighters outside the Crowne Plaza on S. 2nd Street.

A hotel fire sent plumes of white smoke above downtown Harrisburg at midday on Monday, blocking off streets for several hours as firefighters fought the blaze.

According to Harrisburg Fire Chief Brian Enterline, the bureau was dispatched at 11:25 a.m. and arrived to find smoke on the first floor of the Crowne Plaza on S. 2nd Street. Shortly after, smoke could be seen rising from an upper floor of the hotel.

He said that the fire started in the hotel’s blind shaft, a brick duct that runs from the basement to the top floor and contains utility pipes. According to the chief, the shaft contained years of dirt and debris that caused the fire to spread. The blaze started in a lower section of the shaft and spread the length of it.

The exact cause of the fire is still being investigated, Enterline said, but added that blind shaft fires are not uncommon.

There were no injuries, and there was no fire damage to any of the hotel rooms, only water damage to a few.

Enterline said that the risk to the rest of the building was low, as the Crowne Plaza has a sprinkler system. However, the entire response took around 2 1/2 hours and was “very labor-intensive,” he said.

Multiple fire departments arrived at the scene including firefighters from Harrisburg, Paxtonia, Swatara Township, Penbrook and Lower Allen Township, among others.