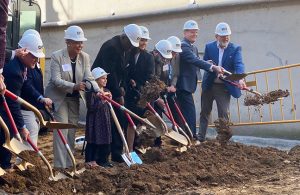 Local officials ceremoniously broke ground on an expansion project at the McCormick Riverfront Library on Thursday.

Tonight is 3rd in the Burg, which means it’s the perfect time to get out and enjoy some of the best art, music and food that Harrisburg has to offer. While you’re out, grab a copy of the magazine at one of our distribution locations. And don’t forget to check out the most recent local news, listed and linked, below.

“Bergman Island” is playing at Midtown Cinema this month. Our movie reviewer says the film is slow at times, but beautiful to watch.

Big Brothers Big Sisters of the Capital Region is ready to meet the needs of children dealing with mental health issues, our magazine story reported. According to organization officials, kids need mentorship now more than ever.

Bob loves October almost as much as he loves art. In his art blog, he shares a 3rd in the Burg preview and highlights artists from Millworks.

The Community Check-Up Center offers medical care in the Hall Manor community for those who may not be accepted elsewhere due to a lack of insurance or available funds. In our magazine story, read about the history of the center and its upcoming fundraiser.

The Dauphin County Library System broke ground on a major expansion project of the McCormick Riverfront Library in Harrisburg, our reporting found. The $3.5 million project partially renovates the library and connects it to the neighboring, historically significant house.

Gamut Theatre is presenting “A Midsummer Night’s Dream,” our online story reported. Actors give their audience a confident delivery of Shakespeare’s signature iambic pentameter, with moments on a sliding scale of sinister and silly, says our theater reviewer.

Harrisburg-area home prices continued to climb while sales dipped in September, our reporting found. For the month, 757 houses sold in the three-county region compared to 812 in September 2020.

The Harrisburg Regional Chamber & CREDC announced its 2021 Catalyst Award winners, our online story reported. Eight community members and organizations were selected for the awards, which recognize positive forces in the community.

Harrisburg Mayor Eric Papenfuse announced his proposal to use $13 million in federal American Rescue Plan funds to reconstruct two city pools, our reporting found. However, City Council members expressed concern that they aren’t being included in the planning process.

Radish & Rye Food Hub in Harrisburg is facing a challenge that many small businesses are dealing with right now—staffing shortages. We published a blog post written by co-owner Julia James to give readers a sense of the difficulties local businesses deal with as they try to adapt to an uncertain, rapidly changing economic landscape.

Sara Bozich has the Weekend Roundup of local events, as always. Click here to find a fun way to enjoy fall.

Sip@SoMa is back, reopening just a few doors down from its original location on S. 3rd Street in downtown Harrisburg, our online story reported. The tasting room will feature products from a rotating lineup of Pennsylvania brewers, vintners and distillers, in limited engagements.

TheBurg Podcast takes several of our magazine features and expands upon the print story. This month, we feature stories of a lost-and-found elk, a very large mural and a place for kids to create art, along with the monthly fan favorite, The Most Harrisburg Thing.

Walnut Street in downtown Harrisburg will receive a secondary name to honor a Black historical figure from the city, our online story reported. It will be named T. Morris Chester Way in remembrance of the prominent lawyer, soldier and the only Black war correspondent during the Civil War.