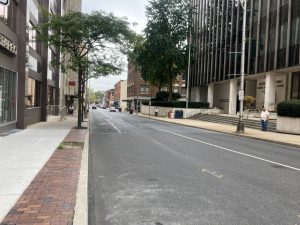 A downtown Harrisburg street will get a new name to recognize Black history in the city.

At a legislative session on Tuesday night, City Council unanimously approved a resolution to designate a section of Walnut Street as T. Morris Chester Way.

“I think it’s important that we recognize and highlight the contributions of African Americans in the city of Harrisburg and what we’ve done to improve Harrisburg despite the odds,” council member Westburn Majors said.

The idea was brought to council by the IIPT Harrisburg Peace Promenade, which is responsible for the recent installation of the Commonwealth Monument on 4th and Walnut streets.

According to the Commonwealth Monument Project, Chester was a prominent figure in Harrisburg history during the 1860s. He was a lawyer, soldier and the only Black war correspondent during the Civil War.

Chester is also recognized as one of the bronze figures in the Commonwealth Monument.

Walnut Street will keep its name, but, from Commonwealth Avenue to Front Street, it will gain T. Morris Chester Way as a second name. This will allow addresses to remain the same and avoid confusion, city Engineer Wayne Martin explained to council at a previous meeting.

Lenwood Sloan of the Peace Promenade and executive director of the Monument Project said that the name “would concretize our designation as a national heritage site.” It will help create a pathway that connects several of the group’s African American history memorial sites, which include the Commonwealth Monument and the Bethel Heritage Trail, which commemorates the Bethel AME church in Harrisburg, he said.

The naming of T. Morris Chester Way, he said, will bring all of these sites together.

Harrisburg has given city streets surnames in the past, explained Martin, naming Mary Sachs Way, on N. 3rd Street, and Dennis Green Way, the 1100 through 1300 blocks of Walnut Street, as examples.

He added that the renaming comes just as the city is moving forward with its East-West Multimodal Connection Project, which will include construction and resurfacing on Walnut Street, from 5th to Front streets. Martin expects construction to begin next year.

“I think it’d be a perfect opportunity to tie all of these projects together,” he said.

For more information on the Commonwealth Monument Project, visit their website.