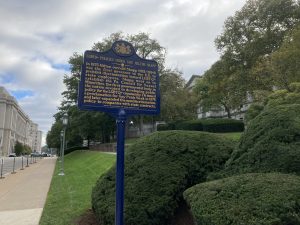 Harrisburg made a stride this weekend in recognizing a portion of history that local activists say is often ignored.

“People look to these historical markers as a window into our state history,” said Barry Loveland, chair of the LGBT History Project. “It’s really rewarding to know that finally some of this history will get recognized.”

The plaques, one at N. 3rd and North streets, the other at 205 State St., tell the stories of past Pennsylvania Gov. Milton J. Shapp and Richard Schlegel, a pioneering gay activist, respectively.

These are the first historical markers for LGBTQ history in the commonwealth outside of Philadelphia, Loveland said.

The LGBT History Project started in 2012, and since then, Loveland and others have uncovered and documented many stories from LGBTQ history. Shapp and Schlegel’s stories were two that had huge impacts in central PA, and nationally, Loveland explained.

Loveland said that he was surprised to find out about Shapp’s advocacy for the LGBTQ community.

“He’s not particularly known for gay rights accomplishments,” he said. “That’s something we were surprised by. Shapp was really ahead of his time.”

In 1974, Shapp met with activist Mark Segal, which is believed to be the first meeting of a sitting governor with a gay activist, according to the history project’s findings. Shapp later appointed a task force to study and advise him on improving public policy for LGBTQ people, Loveland said. Shapp then issued an executive order in 1975 banning discrimination in employment for LGBTQ state employees, making Pennsylvania the first state in the nation to do so, he added. In 1976, he created the Pennsylvania Council for Sexual Minorities, the first official governmental body in the United States for improving public policy for LGBTQ people, according to the history project.

Schlegel, a graduate of Penn State University, worked for the federal government in Washington, D.C. in 1951 before he was fired for being gay, according to Loveland. Schlegel took his case to the U. S. Supreme Court and lost, but Loveland said that the arguments he made in his case were influential in later cases of employment discrimination.

Schlegel began working for the PA Department of Highways (now PennDOT) in 1963. He became active in the Janus Society, one of the first LGBTQ organizations in the state, and established a central PA chapter in 1964. The group met at Schlegel’s apartment at 205 State St., Loveland said. Schlegel was investigated for his involvement in gay activism and fired from his state job. He later retired to Lewisburg and set up a foundation to benefit LGBTQ organizations, according to the project.

“To finally have this history being told as part of the overall history of PA is really inspiring,” Loveland said.

Mark Segal, the gay activist and publisher of the Philadelphia Gay News who met with Shapp, and Robert Deibler, a relative of Schlegel, were in attendance at the unveiling on Sunday.

The markers were approved earlier this year by the Pennsylvania Historical and Museum Commission, Loveland said.

Loveland hopes that these markers are just the start of a larger initiative to recognize and memorialize LGBTQ history in the state.

“These markers are the next step in trying to get a public face on this history,” he said.

The history project also currently has its “With Open Heart and Open Arms: LGBTQ Cuban Refugees and the LGBTQ Community’s Response to the Mariel Boatlift” traveling exhibit on display at Elizabethtown College’s High Library. The exhibit is also available virtually on their website.

For more information about the LGBT History Project, visit their website.