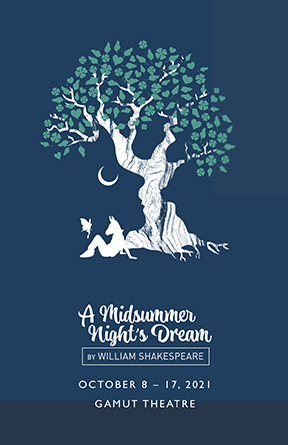 Methinks the Bard overindulgeth in his snuff box when he quill-penned this script.

By its very nature, “A Midsummer Night’s Dream” is a farce: play within a play, a dream within a dream. You may recognize some lines that have been both emulated and parodied in contemporary culture, the play’s five interconnecting sub-plots themselves are only loosely cohesive, because dreams usually are.

Using an ensemble cast, the play’s sub-plots revolve around an aristocratic wedding. A troupe of six actors, each awkward in their own delightful way, are preparing a play as a wedding gift. Playing out in other scenes, a love parallelogram shifts dimensions several times when spirited woodland creatures cast love/hate spells and spread general confusion and mischief.

Directed by Melissa Nicholson, the Gamut actors deliver their audience clever interpretations of their roles and confident delivery of Shakespeare’s signature iambic pentameter, with moments on a sliding scale of sinister and silly.

The absurd comic relief Nick Bottom (Nick Wasileski) is by far the character that commands the most attention. During the troupe’s rehearsal for the wedding play, Bottom’s obnoxious grandstanding evoked hilarity and made me feel grateful that I didn’t have to personally work with him. The scene in which he tries to kill himself in the most blundering way possible had me laughing so hard I snorted in public. (I only embarrassed my teenage daughter sitting near me, so it was worth it.)

Part of that same scene was the bumbling play actor Flute (Ross Carmichael). Extra kudos to Carmichael for rocking a Brian May wig, and for showcasing his range in also playing the play’s more hardened characters (Oberon, Theseus). His performances were each so convincing that I didn’t realize he played multiple characters until I read the program after the fact.

Romantic rivals Hermia (Abby Carroll) and Helena (Najuma Norman) engage in stage combat over their love interests before the spirits make things right again. (Read: a good old-fashioned catfight.) Although analysts of “A Midsummer Night’s Dream” can point to many aspects of this play that promote feminism, this scene is likely not one. Still, both actresses battle each other compellingly from the first lunge to the last hiss.

The eventually empowered Puck (Kim Greenawalt) gave a spritely performance, playing harmful pranks, yet somehow emerging as cutesy and flower-smelling in the end. A special round of applause goes to the student actors in the forest for serving their masters as both supporting characters and a capable woodlands decorating crew (Daniel Hutchins, Leighann Koppenhofer, Georgia Bailey, Eurya Aviles, Rio Gonzales, and Adam Bateman).

As an honorable mention, a character interpretation I particularly enjoyed was the play actor Starveling (Christopher Ellis). Not only did his uptown costume give off a swagger opposite of the word “starve,” he was the only character to briefly stray from iambic pentameter, oozing “too cool for school” sophistication in his brief, measured dialogue.

Before you “whither wander you” to Gamut Theatre to see “A Midsummer Night’s Dream,” it might help the course run smoother if you brush up on your Shakespeare. Click through Wikipedia for the synopsis, or break out your old Cliff’s Notes, if you’re my age. The play-by-play reads like the latest episode of your favorite soap opera meets Downton Abbey, with just a wand-ful of Harry Potter to make it fanciful.

“A Midsummer Night’s Dream” runs Oct. 8 to 17 at Gamut Theatre, 15 N. 4th St., Harrisburg. For more information and tickets, visit www.gamuttheatre.org. Prior to each show, check the website for specific show dates and times, as well as any late-breaking COVID-19 guidelines and protocols.