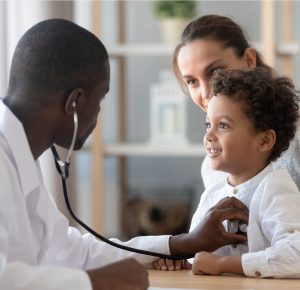 Like many organizations, the Community Check-Up Center has been through a lot since COVID hit. As a healthcare-based nonprofit, it may have endured even more than most.

Now, with a big fundraiser on tap, it’s looking to rebound for its beneficiaries—the underserved health community in Harrisburg.

For nearly 30 years, the Community Check-Up Center has offered quality medical care in the Hall Manor community for children and adults who may not be accepted elsewhere due to a lack of insurance or available funds. The nonprofit’s stated mission is to welcome, respect and treat all who come for care, regardless of their ability to pay.

Currently, the center serves a growing roster of around 2,000 pediatric and women care patients, said Holly Leggett, who serves as co-president of the nonprofit’s board of directors, along with Diane Voda.

“I’m an advocate for available quality care for everyone,” said Leggett, who first became involved with the center around 10 years ago. “We see patients whether they can pay or not. The health of one citizen in the area can affect all the rest of the community.”

The clinic was started in 1994 by four frustrated Head Start moms, long tired of hitting brick walls while seeking medical care for their children within their means. Initially, the facility offered only pediatric care but later expanded to include gynecological and family planning services, based on community need.

Today, the center’s busy staff includes two doctors, two licensed nurse practitioners, three administrators and four medical assistants. More staff is needed, however, as patient numbers continue to increase, Leggett said. Volunteers are restricted from assisting with patient care due to federal health rules, so instead tend to outside grounds or housekeeping, read to visiting children and other tasks.

Local author, teacher and photographer Deanne Burch began serving on the center’s board of directors and development committee around two years ago.

“I knew people on the board and was really interested in it,” she recalled.

Burch helps to organize fundraiser events benefiting the Check-Up Center, which includes an upcoming event on Nov. 13. An invitation-only fundraiser dinner kicks off at 6:30 p.m. at Vrai restaurant and bar in Lemoyne.

Vrai owner Shelly Page, who is Burch’s neighbor, serves on the Check-Up Center’s leadership council and is donating the restaurant’s food, beverages and service for the event, which she hopes will raise $100,000 and gain new sponsors for the facility. Joining the effort is Shelly’s husband, Mike Page, who retired in July as a general surgeon with UPMC.

Leggett said that the center “operates on a prayer that we continue every day,” garnering 60% of its funding through community support such as foundations, local businesses and individuals. Its remaining portion is funded through state Medicaid reimbursements and the Family Health Council of Central Pennsylvania, a private, nonprofit “dedicated to improving health, preventing disease and promoting wellness,” according to its Facebook page.

Shelly Page initiated the upcoming Vrai fundraiser with a focus on Burch’s “inspiring” book, “Journey Through Fire and Ice: Shattered Dreams Above The Arctic Circle,” which was published earlier this year.

“I had read Deanne’s book and thought it would be a great thing for people to come and talk about it,” she said. “The story just has so many elements.”

In her book, Burch writes about a life-changing ordeal she endured as a young woman more than 50 years ago when accompanying her husband Tiger to a remote Alaska village near the Arctic Circle. The couple remained there for months while Tiger conducted a study of the area, making do without basic plumbing and electricity.

Within a span of days there, the Burches narrowly escaped death while camping, followed by Tiger suffering severe burns when their house caught fire. Despite a three-month hospital stay, Tiger’s seared lungs never recovered, Burch writes.

“I thought I had a good story because I’ve been through a lot,” Burch reflected. “It’s a story about overcoming tragedy.”

Burch will be on hand selling copies of her book at the upcoming Vrai fundraiser, with all proceeds benefiting Community Check-Up Center.

“When you get involved like this, you’re helping the people in Hall Manor,” Burch noted. “An ex-director told me our greatest need (at the center) is staffing, but in general, I believe our greatest need is getting all people vaccinated.”

The Community Check-Up Center also serves as a conduit that refers individuals to outside agencies for other needs. Leggett cited clients’ “greatest needs” as “an assurance that they have a roof over their head, food on the table, medical care and a chance for life.”