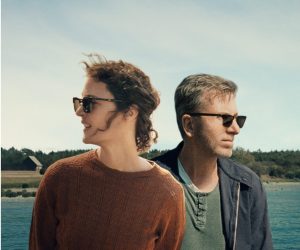 Fans of Swedish film director Ingmar Bergman shouldn’t get too excited about Mia Hansen-Løve’s newest film, “Bergman Island.” While the film spends a lot of time dictating his history, it ends up being more of a backdrop to the story than anything else, and instead, the film focuses on a woman named Chris.

Chris (Vicky Krieps) is visiting Bergman Island with her partner, Tony (Tim Roth). They are both filmmakers. Tony has been called there for a screening of a film he made and invited to stay at the Bergman Suite to take in the history of the island, and Chris is hoping for a little inspiration herself for the script she’s trying to write. It is clear that their relationship is not quite what it used to be. The two experience the island at the same time, but separately, and this causes miscommunication and confusion at times. Chris and Tony seem to be together out of a force of habit and comfort rather than actual enjoyment of each other’s company.

While I previously said that Bergman is more a backdrop, there is one nugget of information that comes heavily into play in the film. Early on, a debate is sparked about how Bergman had nine children with five different women, and Chris asks what everyone thinks about a woman having children by different men. Everyone thinks this is ridiculous. This causes Chris to dive into her past, ultimately influencing the script she writes in her time there. She begins to write about her first love, who she departed from but reunited with years later, after she had found someone else and had a kid with them.

She focuses her screenplay on this memory, exploring the idea of “Amy” (the stand-in for herself, played by Mia Wasikowski) and Joseph (Anders Danielson Lie) being reunited. Chris allows the story to act as a form of therapy for her, helping her come to terms with the way her life has ended up.

It’s clear that Hansen-Love has poured a good bit of herself into Chris—she is French and has a child by a man who she no longer connects with. The concept is clear, and the message that Hansen-Love wants to drive home is done so eloquently, but the film itself is kind of plodding and stale (if not rich in gorgeous seaside imagery). Though a meta approach is usually a plus in a film like this (Hansen-Love has written a character based on herself, who writes a character based on herself), the concept may have been better suited in the format of a short film. While this reviewer usually revels in slow pacing, there is a difference between that and stretching a story to fit a skeleton of feature length.

But overall, the film is striking as a mood piece, and once you’ve gotten the message, you can sit back and enjoy the quiet, breezy shores of the Swedish backdrop. And the cast does a wonderful job—Krieps and Wasikowski draw out their quiet, hopeful misery in a compelling way. “Bergman Island” will play at Midtown Cinema in October.