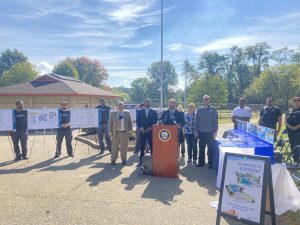 As Harrisburg finds itself swimming in federal COVID relief money, the mayor has some plans for how to use it.

At a press conference on Thursday at the Hall Manor Pool, Mayor Eric Papenfuse announced his proposal to use a portion of the city’s allocated American Rescue Plan money to rebuild Harrisburg’s two public pools.

“Those pools have served the city well for five decades, but they are now officially beyond their useful life,” Papenfuse said. “The American Rescue plan funds […] are designed to help people who need help the most. This is the perfect use for those funds.”

Papenfuse said that he intends to use $13 million of the city’s rescue plan funds to renovate both the Hall Manor and Jackson Lick pools, which are both over 50 years old.

In total, Harrisburg is set to receive $48.8 million in American Rescue Plan funds. The city has received half of the total funds already and expects to receive the rest next year.

Papenfuse said that rebuilding the pools will provide a form of safe recreation for children and families in Harrisburg.

The city is currently soliciting feedback from residents on what they would like to see incorporated into the designs of the pools, however, Papenfuse already has some ideas. 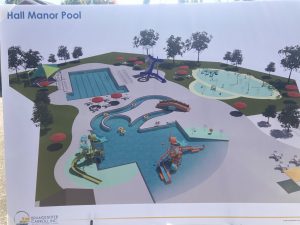 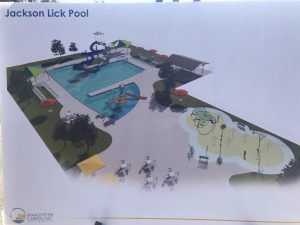 Harrisburg has worked with engineering firm Brandstetter Carroll Inc. to draw up plans for the pools that include water slides, splash pads, lazy rivers, picnic pavilions and lap pools, among other features. Pool houses will be reconstructed, as well.

“The constant feedback from the community has been just how important the pools are to our civic life,” Papenfuse said. “The community would like to see these pools reinvigorated for the next generation.”

He added that, for the past eight years, the city has conducted various studies on the pools. While there has been demand for the pools, the city has never had the funds to reconstruct them, but rather, patched and repaired wherever they could over the years, Papenfuse said.

Both pools have been closed for the majority of the past two years due to COVID. The Jackson Lick pool only opening briefly this past August, after facing a shortage of lifeguards. Parks and Recreation Manager Kevin Sanders said that he thinks finding staff will continue to be an issue even after the reconstruction.

Papenfuse said that the construction would take about three years to complete and that they would stagger work on the pools so that one is always open.

Admission to the pools would be free during construction and for at least a year after, Papenfuse said.

The new pools, Papenfuse said, would last for years to come.

Under the rescue plan fund guidelines, there are rules for how the money can be used. Papenfuse said that this project complies.

“The pools are going to benefit some of the folks who were affected by COVID the most,” he said. “It’s about racial equity; it’s about social justice.”

Harrisburg’s City Council would need to approve the plan, which Papenfuse said he will propose as part of the 2022 budget. He said that he has spoken with members of council about his plan.

“I think they will be very supportive,” he said.

City Council member Westburn Majors said that he had a brief conversation with Papenfuse last week, but that overall, communication with the administration has been lacking.

“It’s extremely frustrating that the first time we formally hear about the plans, it’s at a press conference,” Majors said when reached by phone. “Since the rescue plan money got passed, I have repeatedly asked for the administration to have a conversation with council.”

Majors said that, historically, council has been supportive of renovating and keeping the pools, even when the administration has pushed replacing the pools with splash pads.

“I don’t think anyone is opposed to looking at pools as an option,” he said. “But I want to have a larger conversation. Everyone should have a stake in how this is spent.”

Several other council members have voiced concern about the lack of communication, as well. Most recently, council member Danielle Bowers publicly shared her sentiments towards Papenfuse at a legislative session on Tuesday.

“We are ready and waiting to meet with you to discuss a spending plan for the American Rescue Plan funding that makes sense for the longevity of the city,” she said. “My colleagues have politely inquired about the mayor’s absence and have received radio silence.”

In addition to the pool proposal, Papenfuse has also discussed using about $12 million more in the federal funding to create a guaranteed income program. Under that initiative, the city would provide monthly payments to possibly thousands of qualifying low-income families for a multi-year period, he said.

In addition to the online survey, residents can comment on the pool proposal at various outreach opportunities throughout the city.

The dates for outreach pop-ups are listed below: