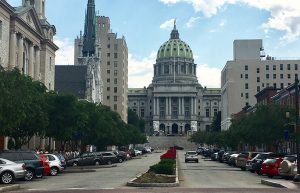 A view of the state Capitol

You can’t predict the future; you can only predict the past. But here’s my best stab at it anyway. Artists, entrepreneurs, engineers and city officials in Harrisburg have big plans for 2021. Below, you will get an idea of what may be coming down the tracks. Take it with a grain of salt. If 2020 taught us anything, it’s that plans can change very quickly.

This was one of the hottest legislative topics in the city in 2020. Months of town hall meetings and public comments from concerned residents resulted in approval of a board tasked with keeping a check on Harrisburg’s Police Bureau. The nine board members will be empowered to review police documents and records and suggest recommendations to City Council. Council and the mayor are slated to appoint residents to serve during this coming year.

Community policing
Harrisburg substantially increased its Police Bureau budget for 2021, creating new community policing positions. There will be seven “community service aides,” a new civilian position aimed at improving bureau relations with residents and assisting officers. Two more co-responders will add to the one that already works in Harrisburg through a Dauphin County program. The co-responders are trained professionals who assist with police calls where mental health issues may play a role.

Concerts
Oh, the days of listening to live music. Harrisburg University had big plans for 2020 concerts, but COVID derailed all of them. That didn’t stop them from rolling out big names for 2021. Rockers Jason Isbell and the 400 Unit are set to perform on May 29 in Riverfront Park. Sept. 23 brings a weekend concert blitz including Cage the Elephant, Dawes and Portugal. The Man. Cancelled concerts from 2020, including Young the Giant and MisterWives, have been rescheduled for 2021, as well.

Development
In his January column, our editor reflected on the many major development plans that popped up during 2020, but didn’t see much action. Developers have big plans for the new year, but when exactly will they come to fruition? The Bridge Ecovillage plans to start construction on Harrisburg’s old Bishop McDevitt High School in the spring. Integrated Development Partners may begin construction on the former Salvation Army building on Cumberland and Green streets, depending on city approvals. They are proposing 16 market-rate condominiums. Also hinging on city approval is a plan to renovate the former Gerber’s Department Store—also known as the “Carpets and Draperies” building for the sign on the front façade—on the 1500-block of N. 3rd Street. Harrisburg resident Nathaniel Foote hopes to transform it into a small apartment building by the end of the year. TLC Construction & Renovations plans to construct eight apartments in Uptown, and two abandoned buildings on N. Cameron Street are slated for conversion to office and residential spaces by Harrisburg Commercial Interiors. Lastly, Harrisburg University should finally break ground on its 11-story academic building.

New Brews, Eats
A Broad Street Market favorite, Zeroday Brewing Co., is slated to open a much larger location on the 900-block of N. 3rd St. early this coming year. Radish & Rye Food Hub, which was also a market vendor, should be opening soon just across the road on N. 3rd Street, the owners confirmed. Also expected early this year is highly anticipated Good Brothas Book Café on the 1400-block of N. 3rd Street. Co-owner Tony Diehl of Denim Coffee, with shops in Carlisle and Chambersburg, said they will likely open their third location at 401 Walnut Street in a couple of months.

Mayoral Race
Following a chaotic presidential election year, Harrisburg will have a race for its own chief executive in 2021. The primary election will take place in May, followed by a general election in November. Current Mayor Eric Papenfuse will likely run for re-election. David Schankweiler, the former publisher of the Central Penn Business Journal and the former chair of the state-appointed Intergovernmental Cooperation Authority, said that he plans to challenge Papenfuse. According to sources, former city council member Otto Banks may be running, as well. Additionally, four City Council seats will be up for election.

Murals
Sprocket Mural Works announced that they will hold a 2021 Mural Festival in Harrisburg. According to their website, they plan to paint more in Allison Hill, create a mural on the Mulberry Street Bridge and would like to create a pocket park in Midtown. However, they may not hold an outdoor celebration, due to COVID.

South Allison Hill Safety Project
Approved in the 2021 city budget was $103,345 for an initiative to improve lighting, safety, blighted properties and vacant lots in Allison Hill. Tri County Community Action, Wildheart Ministries, Power to the Hill and four other organizations decided to take action after seeing an uptick in crime in that section of Harrisburg.

Street improvements
City Engineer Wayne Martin has told TheBurg that 2021 will be busy for road work in Harrisburg. Some larger projects include reducing travel lanes on State Street to decrease car accidents and pedestrian fatalities. This was approved by PennDOT, which owns the road. Other projects coming next year will likely include adding bike lanes, parking and sidewalk enhancements on Chestnut and Walnut streets. Plans for converting 2nd Street to a two-way road, improving 7th Street and extending a pedestrian and bicyclist friendly corridor on Boyd Street from N. 3rd to N. 6th street are in the beginning stages.