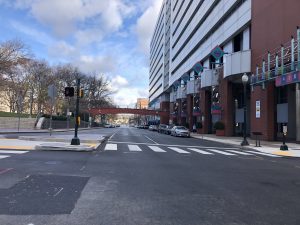 City engineers’ wheels are spinning when it comes to travel in Harrisburg.

“We want to protect our most vulnerable pedestrians and bicyclists,” Martin said.

Parts of these corridors are listed on Harrisburg’s high injury network and are crash-prone streets, Martin said.

Besides safety reasons, Martin said the project has an economic aspect.

“Pedestrian and bike improvements tend to increase the amount residents stop at retail shops and restaurants,” he said.

The improvements will intersect with the Capital Area Greenbelt, Martin said, making bike travel through the city more efficient. People will be able to move more safely from the Walnut Street pedestrian bridge to Strawberry Square and the state Capitol complex, he said.

The Walnut Street portion of the project will extend from the pedestrian bridge on Front Street to 4th Street. Walnut will be re-striped to include an eastbound contraflow bike lane and westbound sharrow markers, which indicate shared bike/vehicle lanes. For easy access from the pedestrian bridge, a bike-only crosswalk will stretch across Front Street.

A raised intersection will be constructed at Walnut and 2nd streets to slow traffic and improve pedestrian visibility. Sidewalks along Walnut Street will also be improved.

Between 3rd and 4th streets, Walnut will be widened to include a westbound bike lane in addition to the eastbound lane. There will be parking on both sides of the street, along with a bus stop.

Chestnut Street additions include re-striping for east and westbound bike lanes. Curbs at the 3rd Street intersection will be extended to protect cars, and portions of the sidewalk along Chestnut will be reconstructed. A bus loading and unloading area will be added and a raised crosswalk at South Dewberry Street will be built. The Dewberry Street Loop will also be re-striped to include more parking.

The East-West Multimodal Connection Project is part of Harrisburg’s Vision Zero initiative to decrease pedestrian fatalities in the city.

The multimodal project is in the preliminary planning phase and construction is expected to begin in 2022.

Costs are expected to be around $1.4 million, and the city already has received $500,000 in grants for the project, said project manager Matt Shinton of Kimley-Horn engineering firm.

Martin is encouraging residents to complete a survey on their website to provide feedback on the project.

“We feel like we got a good collaboration with stakeholders, but ultimately we want residents to comment as well,” he said.

Other Vision Zero projects in the design phase include the “Courthouse Connection” project that will extend a pedestrian and bicyclist friendly corridor on Boyd Street from N. 3rd to N. 6th street. Martin said they are waiting on construction funding.

State Street improvements are also in the works to make one of the most dangerous roads on the east coast safer for pedestrians. The project, which includes a major “road diet” to reduce the number of travel lanes is fully funded and looking at a spring construction start, according to Martin.

Plans for 7th Street feature a roundabout, which will be constructed near the new federal courthouse and a center median with street trees. Martin said that project is currently in the bidding stage.

A 2nd Street project to convert the road from one-way to two-way should be accepting bids by the end of the year, Martin said.

“It’s going to be crazy next year,” he said.