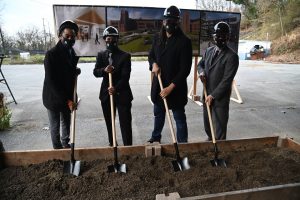 The Bridge principals took shovels in hand at a ground-breaking ceremony on Thursday. Photo courtesy of The Bridge.

Harrisburg is getting closer to seeing an anticipated development project take shape.

On Thursday, members of The Bridge Ecovillage team celebrated a step in the right direction towards construction on their mammoth project to turn Harrisburg’s old Bishop McDevitt High School into an eco-friendly community center.

In October, the school building at 2200 and 2300 Market St. was re-zoned by City Council from an “institutional” zoning designation to “commercial neighborhood,” allowing The Bridge to move forward with their mixed-use plan.

“This was another step to engage the community and keep moving forward,” said Corey Dupree, chief operations officer, of their ground-breaking ceremony on Thursday. “But we are nowhere near done.”

Plans for The Bridge Ecovillage’s 115,000-square-foot building include creating co-working spaces, a large event space, residential units and indoor gardening spaces, among others. 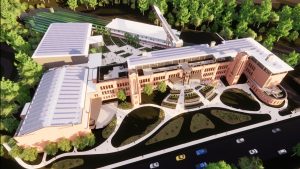 Rendering of The Bridge’s completed building.

Dupree said that the next step is to present their land development plan to City Council for approval, hopefully in January. Following that, they plan to begin light demolition work this winter with construction starting in the spring.

The estimated total cost for the project is around $40 million, Dupree said. He explained that they are still building up their capital, but hope to have public buy-in since the center would be for the community.

Earlier this fall, The Bridge applied for a grant under the state’s Redevelopment Assistance Capital Program (RACP). Bridge Chief Executive Officer Gary Gilliam Jr. said that they requested $2 million to begin construction, install HVAC and sprinkler systems, do roofing and electrical work, among other tasks.

Dupree said that they are still waiting to find out if they will be awarded the grant.

However, he said that they are still on track with their timeline.

“We are still right on line for our target,” he said. “There’s a lot of work that still needs to be done.”

For more information on The Bridge Ecovillage, visit https://www.thebridgeecovillage.com/.