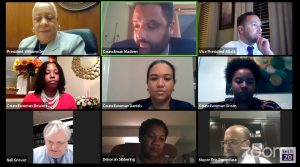 Screenshot from the virtual council meeting.

After months of debate, Harrisburg City Council has approved creating a new citizen’s body that will focus on police accountability.

After hearing hundreds of public comments and then making amendments to the bill over nearly five months, council voted in favor of it, six to one. Council President Wanda Williams did not support the bill.

“I am in full support that there needs to be a process to reform,” Williams said. “But we cannot weaken the very system that protects us.”

What began as a proposed board to improve relations between the bureau and city residents was modified, since June, to reflect some community members’ desire to have a check on police.

Through lengthy meetings and public hearings, residents continuously asked that the board be given more power and independence. Council granted administrative subpoena powers and removed the requirement that board members participate in a police ride-along and undergo police academy training.

For some, the changes weren’t enough as council was unable to grant everything they asked for. For example, some residents advocated for changing the advisory board to a review board. City Solicitor Neil Grover said that Harrisburg doesn’t have the authority to do that.

“I demand the mayor and City Council create a community review board with punitive power,” said one public comment from a resident.

In the end, the bill passed and now will move to Mayor Eric Papenfuse’s desk to be signed. At a community town hall in July, Papenfuse said that he would sign the bill in whatever form council passed it.

In other council news, Papenfuse announced Tuesday that Deborah Sibbering was hired as the new diversity officer for the city, a position he said he’s been looking to fill for a while. Sibbering said she has a background in human resources and local government.

“I can use my skills to benefit the city as a whole,” she said.