A few years ago, after finishing my annual “top 10” news list, I had a revelation.

“All the stories this year are good news,” I cheerfully told a colleague, who, as I recall, seemed less impressed than I.

Well, that’s definitely not the case this year. The year 2020 will go down in history for many things, but “good news” will not be among them.

Nonetheless, at least in Harrisburg, it wasn’t awful soup to nuts. There were a few bright spots amidst the gloom. So, with apologies to all readers and to humanity in general, let’s revisit 2020 one final time, as I return with my annual, totally subjective ranking of the top 10 local new stories of the past year. 10. Land Shark. In this annus horribilis, let’s begin on an upbeat note—perhaps the one unalloyed, unexpected joy to come out of 2020. Naturally, I’m talking about Harrisburg’s one-and-only skating fish, Sharkman. Back in May, he glided into our lives, a vision in blue-and-white felt, offering fleeting comic relief for a pandemic-weary city. Before long, Sharkman sightings abounded, the costumed critter becoming a social media celebrity and even making a Burg cover. A few months later, a young musician named Jordan Dandy took up the inspirational cause in Harrisburg, holding up signs with messages like, “I value you” and “You’re so important.” When I look back on the chaotic, divisive, dark year of 2020, I hope that these two selfless people come first to mind. 9. Crime & COVID. Now that I’ve built you up, let me bring you back down. Like in many U.S. cities, Harrisburg experienced a surge of gang activity, which, inevitably, led to turf battles, disputes and violence, especially in certain city neighborhoods. The pandemic seemed to play a big role, with jobs lost, schools closed and youth idle. The city and county responded by gearing up its anti-gang task force, but not before numerous young people took a wrong turn or even lost their lives. 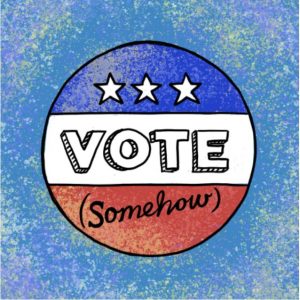 8. Vote, Somehow. In my annual list, I typically keep to stories exclusive to the Harrisburg area. The presidential election was not that, but the changes to our long-established ways of voting affected people in this political town tremendously. In Dauphin County, cautious voters cast more than one-third of their votes through the mail, while many others anxiously masked up and headed to their polling places. Kudos to our election officials for pivoting quickly to what amounted to an entirely new way of holding an election, doing so with speed and accuracy. In just months, they built a hybrid voting system, a legacy that is certain to stay with us, changing our voting habits, perhaps permanently. 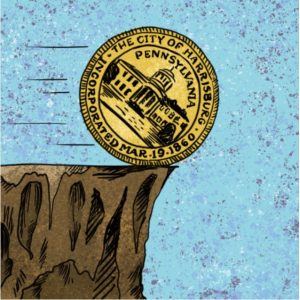 7. Off the Cliff. A late-year story squeezed into my Top 10 this year—the state legislature’s rather surprising decision in November to let Harrisburg retain its elevated earned income and local services tax rates. The average city resident may give this a shrug, as their tax bill will not change at all. But it’s a huge relief for city officials who feared falling off the “fiscal cliff” in a few years, when their extra taxing authority would have expired, forcing them to somehow make up $12.4 million in annual revenue. With this matter settled, the city now feels it can move beyond its decade-long fiscal nightmare, finally putting the profligate Reed years and resulting financial crisis behind it. 6. Major Developments? The announcements began early in the year at the former Bishop McDevitt building, headed down to South Allison Hill, took a turn onto N. 6th Street and then bolted over to the red-hot Reily Street corridor. Italian Lake, downtown and the Shipoke area even got caught up in the frenzy. I’m referring to major building proposals in the city. From pro athletes to ambitious developers to several nonprofits, everyone, it seemed, wanted to build something—often something very large—in Harrisburg. While there was no lack of plans, there was a definite lack of hammers, nails, bricks and mortar. Will 2021 see anything more, um, concrete? I’ve been around this town long enough simply to wish everyone the best and then sit back and see what, if anything, develops. 5. Home Work. The Harrisburg School District has been through the ringer in recent years: a discredited administration, a bitter school board race, state receivership and a whole new leadership team. Just as the dust began to settle, the pandemic hit, sending kids packing for home instruction. Nearly a year later, they still haven’t returned to the classroom. Credit the administration for quickly cobbling together a virtual program and the teachers for implementing it. However, all-Zoom, all the time has been a poor substitute for classroom learning, so much that even the kids yearn to return to school. If you look up the term “no-win situation,” you just might find a picture of the district’s stressed teachers, students and parents. 4. Committee Compromise. Every year, Harrisburg has at least one policy issue that makes it onto my annual list. For 2020, that initiative was the Citizen’s Law Enforcement Advisory Committee. The city first proposed the legislation in June after weeks of Black Lives Matter protests, though the ordinance didn’t pass until November, following several public meetings, hundreds of public comments and numerous changes. For some residents, the legislation went too far; for others, it didn’t go far enough. We’ll now see how this compromise plays out as the committee is populated and begins its work in 2021. 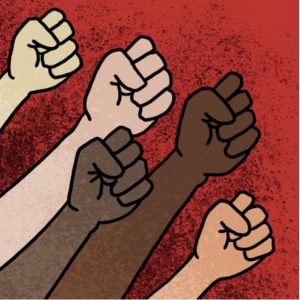 3. Year of Protest. I’ve long considered Harrisburg to be a sleepy capital city. Each morning, state workers zip in and, each evening, they zip right back out. Most of the time, that’s about the extent of the state’s impact on the city. Not in 2020, when Harrisburg became a magnet for protests. The year of outrage began in April, with noisy anti-lockdown protesters gridlocking city streets, then continued in May and June with demonstrations and marches in support of Black Lives Matter, before wrapping up in November with election-related protests and counter-protests. Along the way, there were some tense moments, especially in the neighborhoods near the Capitol. However, as they say, all’s well that ends well. Violent incidents were remarkably few given the thousands of people who participated in dozens of protest actions, even if police sometimes literally had to stand between opposing sides to keep the peace. 2. Small Business Battered. The pandemic has wrought tremendous collateral damage (see several items above), but the impact on the small business community has been especially profound. Harrisburg is a unique place. Snubbed by major chains, local people have stepped in to fill the gap, with each restaurant, bar and shop its own individual, often quirky, creation. As of this writing, most have survived, though some have not, and many are teetering still. As I have before, I renew a call to support our wonderful small businesses and arts groups, which add so much life and character to this weird little city on the Susquehanna River. 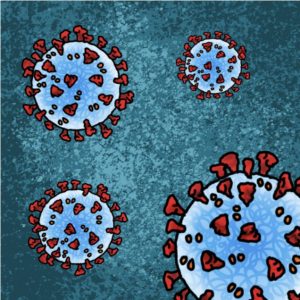 1. COVID Is Everything. In my three decades in journalism, I have never before seen a single story so dominate the news cycle and our lives, affecting everything from our health to our economy to our schools to our social lives to our housing. In fact, you can overlay the pandemic atop of each of the prior nine stories on this list. Since March, it’s been the stormy sea we’ve all been forced to swim in, and, here at TheBurg, we’ve slapped on our masks and tried to cover it from every possible angle. I hope we’ve been of service to our community during this time of trial, though I pray we’ll never have to endure anything like it again.

There’s an old saying that there are few guarantees in life. Heck, 2020 serves as a perfect example. As the strawberry descended in Market Square on last New Year’s Eve, who could have imagined the difficult year ahead? Having said that, I can practically guarantee that, a year from now, my 2021 reflections will be more positive, the news less doom and more bloom.

After all, the coming year has to be better. Right?