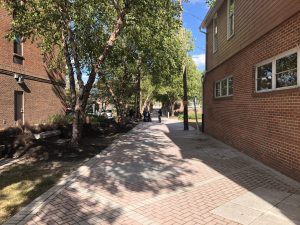 A section of the Urban Meadow near N. 3rd Street and Reily Street.

A strip of green space in Midtown Harrisburg would be lengthened under a plan to extend the “Urban Meadow” to the new federal courthouse area.

City Council recently approved a resolution allowing the submission of a grant application for up to $3 million to the state Department of Community and Economic Development’s Multimodal Transportation Fund Program.

If the grant is received, half of the funds would go to the Urban Meadow extension construction and the other half to area streetscape improvements. The project also includes adding about 50 angled parking spaces on Reily Street between Logan and Fulton streets.

A Dauphin County gaming grant already has fully paid for about $75,000 worth of design fees for the project.

“As the name indicates, it is kind of an oasis in the city,” said Harrisburg project manager Ambrose Buck during an episode of “Community Conversations with Mayor Papenfuse,” the city’s weekly Facebook Live event.

The path extension would be a dedicated pedestrian and bicycle route, including lighting and landscaping. It would connect the federal courthouse currently under construction on N. 6th Street to the Midtown area, Martin said.

He said that, with the forthcoming courthouse requiring about 400 to 800 parking spaces, the city is looking to increase transportation options.

“The goal is economic development through multimodal transportation,” he said.

If the grant is received, construction on the Urban Meadow is expected for early 2021, Martin said.