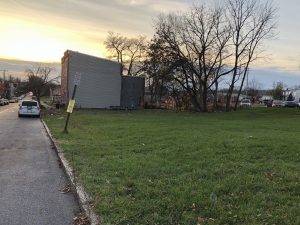 TLC Construction & Renovations plans to build on these empty lots on Kelker Street.

Coming in the spring, a few vacant lots in Uptown Harrisburg will get a little “TLC.”

On Tuesday night, City Council approved a land development plan for the consolidation of three vacant lots on Kelker Street and the construction of eight residential apartments submitted by Tarik Casteel of TLC Construction & Renovations.

“This will bring more stability to the area,” Casteel said during a phone call. “We still have people looking for housing in the area—it’s still a need.”

The apartment building will sit at 440 Kelker St., near other TLC projects including The Harrisburg Uptown Building (HUB) and HUB Veterans Housing.

In addition, the complex will provide affordable housing to the area. Two units will be for low-income individuals with a price point around $700 per month, while the others will be market value, Casteel said.

“The Planning Bureau feels this is a good project, said Geoffrey Knight, director of the bureau, at a council work session on Nov. 17. “It will bring affordable housing to the neighborhood and it will develop vacant lots.”

In the way of parking, Casteel said he will provide eight spots for residents in his adjacent parking lot at the HUB building.

He plans to extend the existing sidewalk on Kelker to the front of the building’s property, as well. There will also be some landscaping done on the 10,214-square-foot property and two new street trees added.

Also on Tuesday, council approved the vacation and striking from the city’s map a portion of Kent Alley that intersected Casteel’s property on the map. Kent Alley used to be a grocer’s alley between N. 5th, Fulton and Kelker streets, but became a “paper street,” meaning it only existed on the map. Since it was still considered a public right of way, Casteel needed it to be vacated in order to develop there.

Casteel said he hopes to use local and minority-owned businesses as contractors for the building project. However, before construction begins, Casteel is waiting for construction material costs to go down. He said due to COVID, they are “through the roof.”

The pandemic already delayed TLC’s progress on the apartment building, but Casteel said they will likely break ground in March. Once they get started, it should take around eight months to build, he said.