While COVID-19 and social upheaval continue to ravage the nation, Harrisburg artists are atop scissor lifts and three-story walls to restore joy through the city’s well-known medium: murals.

Most of 2020 has been a dry spell for art in Pennsylvania’s capital, but it was a matter of timing and opportunity.

“Public art has always been proven to be a sign of a healthy city,” said Megan Caruso, Sprocket president and co-founder. “The whole point of why we’re doing this is to make people feel good and make people proud.”

Artist Samantha Sanders kicked off the season in late September, painting a mural in the rear courtyard of Zeroday Brewing Co.’s future location in Midtown. October started with Steve ESPO Powers’ mural, an extension of his Early Bird Vote project with Make Something.

Then, as part of HDID and Harristown Enterprises’ partnership with Sprocket, three murals were painted along Blackberry Street by artists Dizz Gavins, Tara Chickey and Emily Matusz.

“As we become an even more attractive destination, these murals really add a level of interest that most communities don’t have,” said Brad Jones, president and CEO of Harristown.

The artists, some of whom have worked with Sprocket previously, had significantly different creative visions and were eager to undertake a new challenge.

“It’s kind of like getting a college degree in all of eight days,” Sanders joked.

Sanders wants the mural to transport visitors beyond the courtyard. The creek, inspired by the hometown waters she played in with her niece, doubles as a trail, and all the elements are born from the sun, making the mural seem bigger than it is. 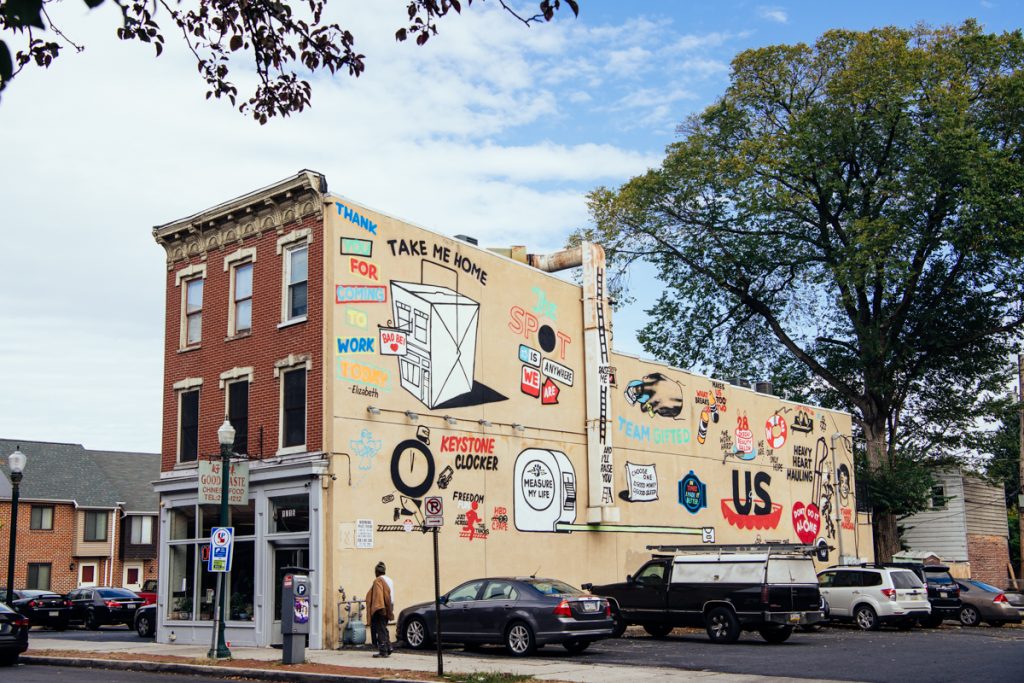 Splashed along the 1000-block of N. 3rd Street is Powers’ mural. In contrast to the season’s other work, his piece is more of a community tribute.

“He’s a fickle cat,” said Aaron Rose, Make Something co-founder. “He doesn’t like to give up too much information about what he’s going to do before he does it.”

In an Instagram video posted by Juxtapoz Magazine, Powers explained how the mural became a diary of his conversations with the community. Specific elements, such as the hair clippers and Chinese takeout container, represent local businesses. 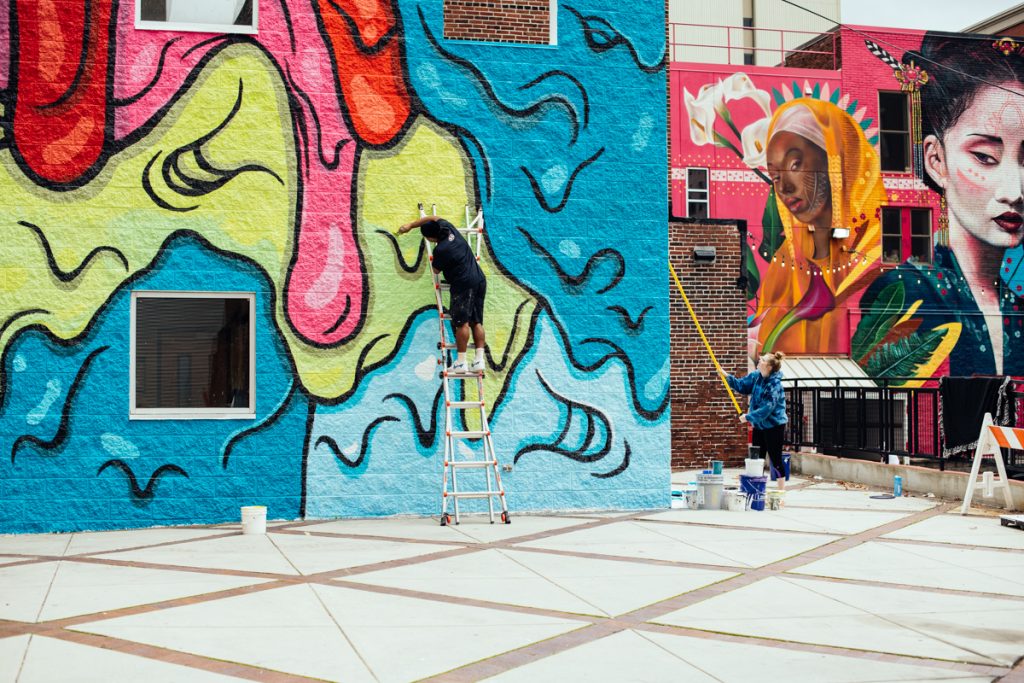 Gavins’ mural is a melting, multicolored wall that stays true to his “dripped gawd” moniker.

Finding his niche through doodling, Gavins began experimenting with texture and the “drip-style” in 2008, and it took a life of its own.

Like much of his work, the mural isn’t intended to convey a specific message.

“It’s just there to help you explore your own creativity,” he said. “So, whatever I created is not necessarily what somebody else sees.” 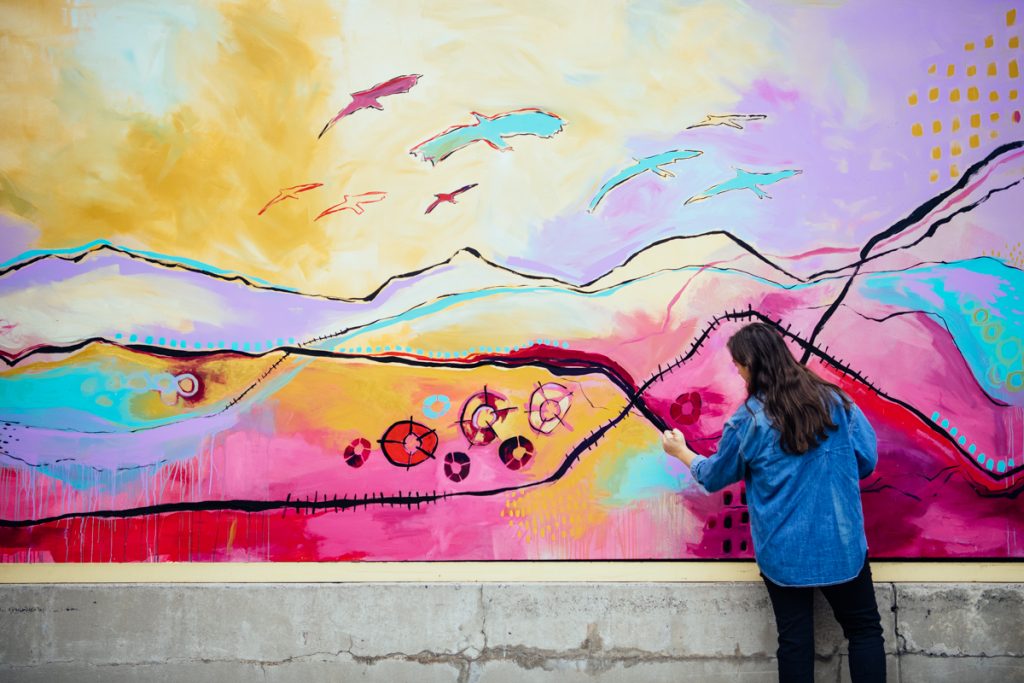 Chickey’s mural is an abstract landscape inspired by dreams and travel memories.

For example, the geometric shapes at the bottom represent a motif she discovered on the edge of a cliff in Iceland.

“I think it’s because I have a 4-year-old daughter, and she’s just full of joy and vibrancy,” said Chickey “And even in this dark time, she brings such beauty to my life.”

Chickey hopes her mural holds the same joy for others. 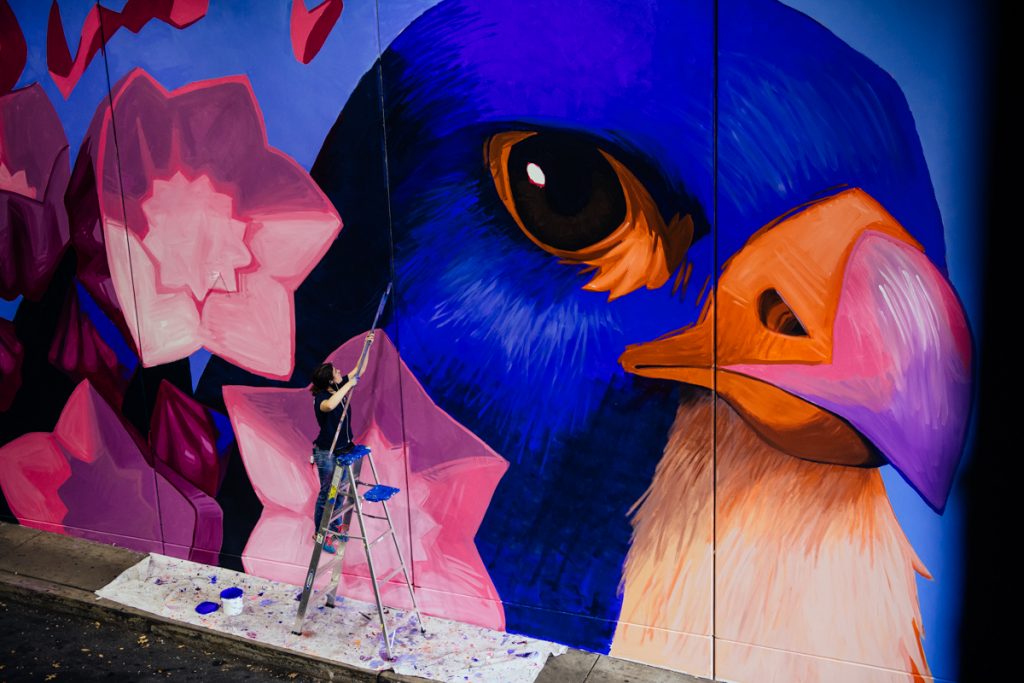 Defined by the unwavering glare of a peregrine falcon, Matusz’s mural is an ode to a nearby treasure. For 20 years, falcons have nested in the same spot on the 15th floor of the nearby Rachel Carson building.

The mural is sharp, veering away from abstractions and reflecting Matusz’s background in realism and digital illustration.

However, she also hopes the mural raises environmental concerns.

“I just want [people] to feel at ease, more connection to nature,” Matusz said. “Who knows how long those falcons will perch out there?”

Sprocket’s next project is an indoor mural at GLO-Harrisburg, a community resource center for LGBTQ+ men of color and trans women of color. The mural will be painted by Dionn Reneé, an artist who has been longing to create a larger piece with Sprocket.

“I look at: Where’s their heart? What is their purpose?” she said. “Developing a concept and theme and color story for them is going to be based off of…the heroes. What are they fighting for?”

Aware of the exclusion that sometimes occurs among different sectors of the LGBTQ+ community, Reneé hopes her completed mural promotes inclusion, empowerment and encouragement.

Caruso explained that the remainder of 2020 will be dedicated to finding new walls and funding, then there will be a call for artists in spring for the 2021 Harrisburg Mural Festival.

The plan is for more murals to go up, but the process might look different due to COVID-19. An outdoor mural festival might not be possible because of the high number of attendees, and the small businesses that normally contribute to Sprocket are recovering from financial losses.

“So, our plan is to do our best, fundraise, shoot high, and see where we land,” said Caruso.