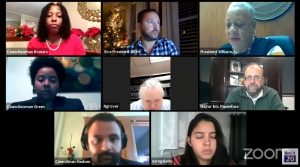 Harrisburg approved a 2021 budget on Monday night, but not before making amendments to Police Bureau spending and personnel.

During a virtual legislative session, City Council approved a $79.2 million general fund budget, which does not include a property tax hike. The budget passed 6-0, with council member Shamaine Daniels not in attendance.

The budget utilizes about $15 million of the city’s large reserve fund balance, which will draw down that accumulated savings to $10.2 million by the end of 2021. The money will be used to add several positions, especially in the Police Bureau, and to pay down debt.

In budget hearings, a significant increase to the Police Bureau budget has been the most discussed of the many budget items and the one that faced amendments on Monday.

“The funding of public safety is so important,” council member Ben Allatt said. “You can’t put a value on the fact that we need to have effective public safety.”

Originally, 12 aides were proposed, but after receiving comments from residents concerned about the positions, council decided it would be best to give the program a trial run for 2021 and, therefore, reduced the number of positions.

In public comments, some residents stated that they didn’t want to see extra funding go towards the bureau at all, saying that’s not what the city needs.

“There are so many pressing needs in Harrisburg right now,” one resident said on Monday night. “More policing funding does not provide houses, food, education, medicine or security. More cops and more money for cops does not make communities safer.”

An additional amendment was passed 4-2 to remove the community policing coordinator position from the budget. This position is currently filled by Blake Lynch, but he will be promoted in the coming year to director of community relations and engagement, leaving his current job open. Council member Westburn Majors said that he believes the community service aides can take on the responsibilities of the coordinator position.

“To me, that could be seven heads being able to do a job that we had one individual doing,” he said.

However, Papenfuse said he did not support that amendment and that council “jeopardized the entire transition that we’ve proposed for community services.”

Council also passed an amendment to raise the city communication manager’s salary from about $66,900 per year to $68,000 per year.

Monday’s meeting was the final council session of the year, unless a special meeting is called before year-end.