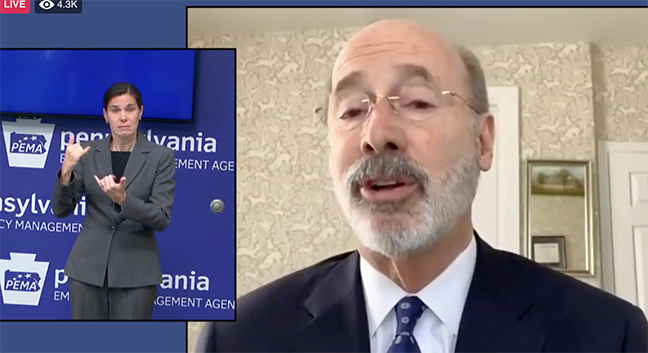 Extra coronavirus restrictions imposed three weeks ago in PA will expire as planned on Jan. 4.

In a virtual press briefing, Gov. Tom Wolf today made that announcement, ending speculation that he might extend them further into the winter.

Wolf said that he’s been encouraged by what he called a “plateauing” of new COVID-19 cases in the commonwealth, as well as the direction of the statewide positivity rate, which stands at 15.1%. It’s fallen for two straight weeks after reaching a high of 16.2%.

Disease death rates continue to be high, and today, the department reported 267 new disease fatalities over the past 24 hours.

Despite the recent reduction in cases, Wolf said, “This does not mean that we’re out of the woods, not by any means.”

At 8 a.m. on Jan. 4, those limitations will be lifted, but the prior, less severe restrictions will remain, which allow for indoor dining at reduced capacity and for the reopening of closed businesses, such as gyms and theaters. The mask mandate will remain.

In addition, health Secretary Rachel Levine today said that her department has debuted a new “COVID-19 vaccine dashboard,” which she described as a “great new tool for people to follow the administration of the vaccine in Pennsylvania.”

The dashboard includes data such as vaccination by county and by demographic categories. Health care workers are the first to receive vaccines in PA, Levine said.

Wolf today counseled patience, saying that, while distribution has begun, it will be some time before most of the general public has access to the vaccine.

“We anticipate it will be months, not weeks,” he said.