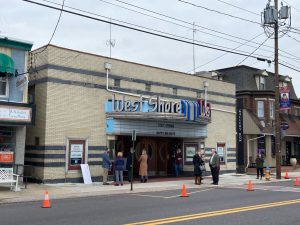 The West Shore Theatre in New Cumberland is getting closer to renovation.

Much of the news lately has been stressful and, honestly, just a downer. But not all of it has been bad here in the Burg. As you mentally prepare for whatever may or may not come to the city this weekend, catch up on our local news coverage listed and linked below.

The Art Association of Harrisburg debuted a new exhibit last week called “Observations & Experiences.” Our art blogger Bob MacGinnes previews the exhibit that is a commentary “on life and its celebration of,” as seen and experienced by a quartet of female artists.

Harrisburg Mayor Eric Papenfuse announced he will require all city employees to receive the COVID-19 vaccine, our online story reported. He said that widespread infection would “cripple” the city’s abilities to serve the residents of Harrisburg.

Harrisburg Regional Chamber and CREDC boards of directors announced their board chairs and officers for the coming year, our online story reported. Meron Yemane of Morgan Stanley Wealth Management will serve as board chair for the Chamber, while Mike Funck of Wohlsen Construction will serve as the chair of CREDC.

Harrisburg residents are bracing for possible protests, hunkering down and hoping for safety, our reporting found. The community has witnessed rallies in their neighborhoods for months, but what could be coming this weekend is especially concerning to them.

Harrisburg University sold $100 million in revenue bonds to finance the construction of its 11-story academic building in downtown Harrisburg, our online story reported. HU President Eric Darr said this was a major step for the project.

Jane Elliot, a prominent race educator, will be a panelist at Sankofa African American Theatre Company’s virtual film festival, our reporting found. Executive Artistic Director Sharia Benn said that she hopes the festival will reach a diverse audience and teach people not only how biases are created, but how they can be changed.

Open Stage’s rendition of “Kafka’s Shorts” will take you on a bizarre, frightening ride, according to our theater writer. The play features six of Franz Kafka’s short stories, three of which you may miss if you blink, but all-powerful in the telling.

The PA National Guard plans to deploy troops to Harrisburg in preparation for possible violent protests leading up to the presidential inauguration, our online story reported. Local and state law enforcement said they will be ready for whatever comes their way, with aircrafts, drones and bomb technicians on standby.

Sara Bozich has a list of weekend activity recommendations, including a custom picnic experience and a private screening at Midtown Cinema. Check out the full list, here.

“Voices of the Pandemic” is a recently published anthology written by healthcare workers, educators, writers, entertainers and others, our magazine story reported. Lancaster-based author Don Helin, who edited the book, believes that this will serve as a way to look back on the emotions that accompanied the pandemic.