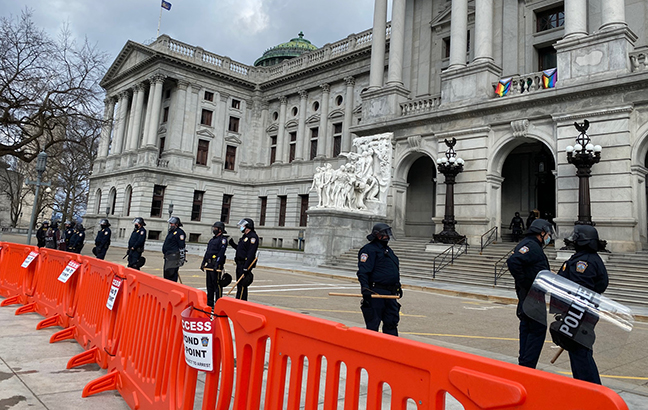 Police stand guard outside the PA Capitol on Sunday

Thomas Duran walked over to the PA Capitol on Sunday to see what was going on.

His assessment: “Not much.”

Duran, who lives in New York, was in Harrisburg visiting friends. So, against the advice of his hosts, he decided to check out what he thought could be a big protest at the state Capitol building.

Instead, he saw just one protestor on the Capitol steps, a man carrying a sign with racist and anti-Semitic scrawl. Otherwise, there was a heavy presence of state and local police, PA National Guard troops and mounted police positioned around the Capitol complex. Occasionally, a surveillance drone buzzed overhead.

“It looks like [the protestors] stayed away,” Duran said. 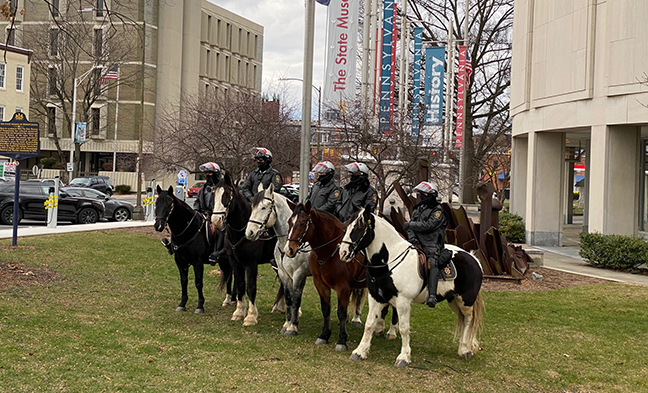 Mounted police gather in front of the State Museum.

Earlier in the week, the FBI warned that armed militia members had chosen Sunday for a rally in state capitals, perhaps including Harrisburg, in anticipation of President-Elect Joe Biden’s inauguration on Wednesday.

In response, the state activated more than 400 National Guard troops, surveillance aircraft were placed on standby, and bomb squads were deployed.

Police also broadcast their intention to block streets and heavily fortify the Capitol complex, hoping that protestors who might have violent intentions would stay away. It appears that the strategy worked. 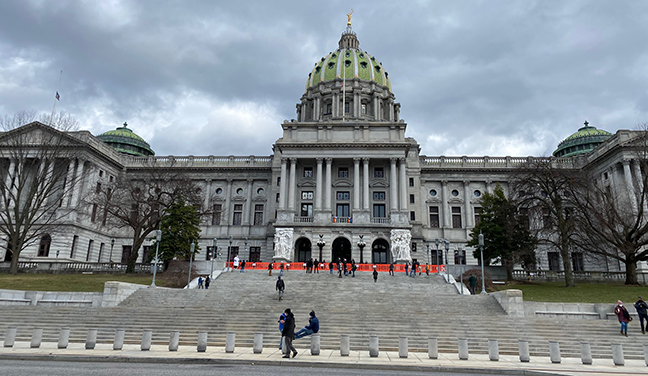 The state Capitol in Harrisburg on Sunday afternoon

By late afternoon, a few protestors had come and gone, including one man yelling into a megaphone and another carrying a gun fixed with a crossbow. Several counter-protestors also stayed for a short time then left.

But all protestors were vastly outnumbered by police, by members of the media and by curious onlookers.

Trish Seaborne took a detour to the Capitol in late afternoon while walking her dog. She said that she had been following a few local social media pages but didn’t see much information on the protests, so went to look for herself.

“I’m surprised, but glad that all seems quiet,” she said.

By 4 p.m., the security ring around the Capitol had been disbanded, and the closed streets were reopened. State police have said that they will continue to be vigilant this week leading up to the inauguration on Wednesday.