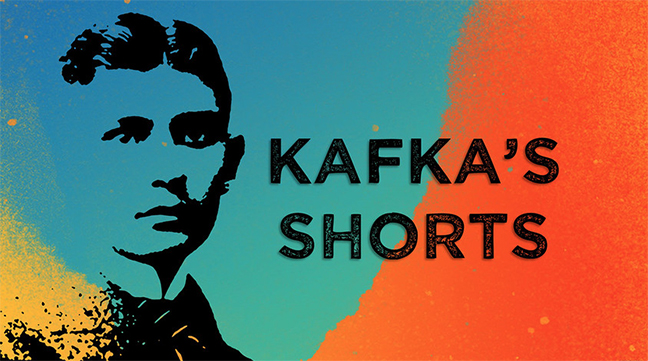 Fewer bodies of work offer such a frightening peek behind the Iron Curtain in the early 20th century than the works of Franz Kafka. Kafka’s stories typically feature internal monologues of tortured, unhealthy protagonists in bizarre and surreal circumstances, usually on an allegorical quest.

Armchair psychologists have speculated which neuroses and personality disorders feed in to Kafka’s story elements, with themes of anxiety, depression, brutality and abandonment dominating his writings. Critics of his work have drawn allegories between the political (totalitarian) and social unrest indicative of Kafka’s time and place, as well as growing up in a patriarchal household.

Open Stage’s austere settings, costumes and ominous carnival music lend to the severity, drama and dark humor of each sketch. Squinting through the metaphorical keyhole of Kafka’s nightmarish brain, it looks like a distorted reality, mostly monochromatic, rife with yellow and red color splashes to symbolize sickness and death. I never imagined his characters wearing masks, but they certainly feed into the mood of dank disease.

The play features six of Kafka’s short stories, three of which you may miss if you blink, but all powerful in the telling.

“Do Not Even Listen” is an internal monologue about meditating, ironically referencing unmasking. In this opening sketch, when I saw the severe, unsmiling features of You [Hanniel Sindelar], it felt creepy, like looking through the keyhole of a political prisoner’s bedroom during my trip to Dachau.

In “An Imperial Message,” an emperor [Sindelar] on their deathbed sends a message through you, the messenger. “The Next Village and the Trees” concentrates on mortality, comparing humanity to snow, here one moment and gone the next.

The three other sketches are longer and more complex.

“A Report to the Academy” is told from the point of view of an aged ape telling his life story from the time he was a young, caged ape. Dressed in a tuxedo, Old Rotpeter [Chris Gibson] orates to his audience from a stage, telling about his expedition to get out of his confines, and how human he needed to become to find his way out. We also learn a little something about the men who guarded him, who perhaps underestimated him. Kudos to Gibson for summoning a “Twilight Zone” look and feel to this segment.

“The Hunger Artist” chronicles the struggles of a sideshow act behind the scenes of a traveling carnival. The “Hunger Artist” [Sindelar] finds audiences are less and less interested in the strange art of weeks-long starvation, pitching ambitious suggestions for how to increase attendance and popularity.

“A Country Doctor” was the creepiest sketch of all, evoking an Edgar Allan Poe-type plot and atmosphere. A doctor [Chris Ellis] travels by horse and carriage through a spooky, wintry town to treat a patient’s gaping wound. After a rude reception by the patient [Matt Golden] and his parents [Nick and Stacey Werner], the doctor goes on a quest to escape and regain his dignity and status in a town that refuses to cherish him.

“Seeing and living in this dark and dreamy world for 90 minutes will help people leave 2020 behind [for] a year of new opportunities, healing and growth,” he said.

If you relish the avant-garde and the macabre, and sometimes desolation of the human experience, then try the existential “Kafka’s Shorts” for your next night in. (For all of us doom and gloomers, that’s every night until further notice.)

“Kafka’s Shorts” runs Jan. 8 to 24, Fridays and Saturdays at 8 p.m. and Sundays at 3 p.m. through Open Stage’s online streaming program on YouTube and Facebook. Visit www.openstagehbg.com for details about tickets and watch parties.