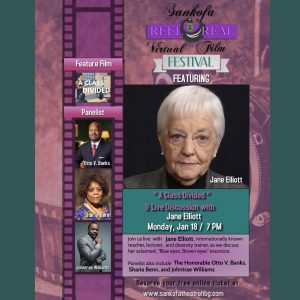 Sankofa African American Theatre Company is ready to discuss how to move forward as a country, and they’ve landed a big name to help.

“We are so excited about bringing Jane [virtually] to this area and audience,” Executive Artistic Director Sharia Benn said.

Elliott is known for her “Blue Eyes/Brown Eyes” exercise that she first conducted with her third-grade students in 1968. The exercise was intended to teach children about racism and bias by telling them one group of students was superior based on eye color.

Since then, Elliott has remained a prominent speaker and diversity trainer.

On Monday, Sankofa will screen “A Class Divided,” a PBS documentary that showcases Elliott’s exercise and follows up with her former students as adults.

After the documentary, Benn, Johntrae Williams, a Sankofa board member, and Otto Banks, a former city council member, will join Elliott for a panel discussion.

“It felt like Jane would add so much value and also help reach a target audience,” Benn said. “We are hoping we will get a good attendance for this.”

Benn said that she hopes the festival with reach a diverse audience and teach people not only how biases are created, but how they can be changed.

The film festival already had four other days of screening films in December, which included movies “Driving While Black,” “A Time to Act” and “Tell Them We Are Rising.”

Benn said all the films circled around the theme of biases.

“The purpose of the film fest is amplifying the Black experience on stage and creating safe space for a diverse audience to explore, dialogue and change for the better,” she said.

Dauphin County was a sponsor of the event, and WITF partnered with Sankofa, as well.

The screening on Monday at 7 p.m. featuring Elliott is free to the public, though registration is required. Benn said that donations are welcomed.

Because of the positive response to the screenings by the community, Benn said Sankofa is considering holding more events like this throughout the year.

“The conversation has been really good,” Benn said. “People are sharing they have really been enlightened on the issue of race.”

For more information on Sankofa African American Theatre Company or to register for the Reel2Real Virtual Film Festival, visit their website.