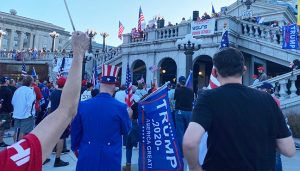 A pro-Trump rally at the PA Capitol in November.

The FBI recently released a memo stating that there were plans for protests in all 50 states this weekend, with concerns that some people might try to storm government offices.

State and city law enforcement officials spoke today on their preparations and how they plan to keep the Capitol and the city safe, guarding against any potential violence.

“The PA Capitol police are now forced to take the necessary actions to make sure that doesn’t happen,” said Superintendent Jo Jacob of the Capitol police.

Jacob said they already have special response team members patrolling the Capitol building. Additionally, he said there are around 400 PA National Guard troops ready to be sent throughout the state, though he didn’t know yet how many would be in Harrisburg.

Pennsylvania State Police Deputy Commissioner of Operations Scott Price added they will be providing aviation support, including fixed-wing aircrafts, helicopters and drones, as well as mounted units, if necessary. Bomb technicians will also be on-site, he said.

“We are well prepared to take on anything that may or may not come our way,” he said.

Carter said that they are prepared to shut down Harrisburg’s city hall, if necessary, and that the bureau plans to block off streets in the area surrounding the Capitol. He declined to say which ones.

He stated that police would work to protect nearby residential areas from being affected by any protests.

“Nothing will get into the neighborhoods,” he said. “We are going to do everything we can to make sure residents are safe.”

Price could not give an exact timeline for how long the increased security measures would be in place. He noted that the Pennsylvania Criminal Intelligence Center is based in Harrisburg and will continue to analyze the situation.

Jacob said that they are expecting the most activity on Sunday. He said that they have seen postings online calling for those who can’t make it to the U.S. Capitol on that day to protest at their state capitols.

He added that they still have not received any requests for permits to protest.

“We are facing never before experienced situations, but we have extensive experience among the Pennsylvania Capitol police and the partnering agencies,” Jacob said.