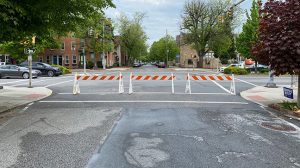 The city closed downtown streets during protests over the summer.

When Kevin Maxson led a Black Lives Matter rally in June at the state Capitol, it was important to him that it was peaceful and centered on unity and healing relationships.

Hearing of a possible armed gathering at the Capitol this weekend, Maxson was disinclined to compare it to the type of event he held.

“These are not really considered protests, in my opinion,” he said. “They’re rebellions. This is an angry mob. Nothing gets done if you react violently and negatively.”

It’s yet to be seen what will happen in the days leading up to the presidential inauguration on Wednesday, but, according to a memo from the FBI, things could get volatile.

The memo stated that evidence led them to believe there would be protests in all 50 states, especially at state capitals, and that some protestors planned to come armed.

For months, Harrisburg has seen protests, one after another, whether it was Black Lives Matter, Reopen PA, or post-election marches. Most were peaceful, though a few had tense moments.

On Thursday, local and state law enforcement officials announced their plans to curb potential violence with the upcoming protests.

Superintendent Jo Jacob of the Capitol police said that special response team members are patrolling the Capitol building. Additionally, he said that there are over 400 PA National Guard troops ready to be sent throughout the state. Pennsylvania State Police Deputy Commissioner of Operations Scott Price said that aircrafts, drones, mounted units and bomb technicians will be on standby.

Mayor Eric Papenfuse confirmed on Friday, during a Facebook Live conversation, that the city plans to close 3rd Street in front of the Capitol, the 200-block of State Street and Commonwealth Ave on Sunday.

“I’m well aware of the anxiety many residents have, including myself,” Papenfuse said. “We will make it through this together.”

Protesters are expected to include far-right extremists, like those who raided the U.S. Capitol last week. However, long-time Allison Hill resident Beau Brown said they are not representative of his party.

“There’s a general depiction that, if you are registered with a certain party, you are in agreement with what’s happening at the Capitol,” Brown said. “But I wholeheartedly disagree with what they are doing.”

Brown said that he is a registered Republican and a gun owner who supports the Second Amendment, yet he believes protesters bringing guns to the Capitol will only do harm.

“Please do not take them; do not inflame this,” he said, speaking to other gun owners. “People in this city are afraid.”

Many residents of Harrisburg, especially those living near the Capitol complex, have experienced fear this year.

Some past rallies, including a Reopen PA gathering in April, bled into the surrounding neighborhoods and gridlocked streets, and, in late May, the initial Black Lives Matter protest saw several clashes between police and people marching through the downtown neighborhood, though later protests were peaceful.

Then, last week, the day the U.S. Capitol was stormed, a group of armed men, some wearing “Proud Boys” jackets, walked the neighborhood streets around the Capitol, chanting slogans that included, “Who’s Streets? Our Streets.”

One person even posted on a Midtown Harrisburg Facebook page on Friday, offering up a spare room in her Mechanicsburg home for anyone afraid to stay in the city.

Pam MacNett, head of the Capitol Area Neighbors group, reflected on protests from the past spring and summer.

“There’s security camera footage from my house of someone walking down the street with an assault rifle,” MacNett said. “This is interfering with all of our livelihoods.”

She also recalled seeing another armed person walking past the elementary school in her neighborhood.

In the coming days, she said she plans to hunker down at home. She advised others to lay low as well.

“I hope people will respect everybody and get through this safely,” McNett said.