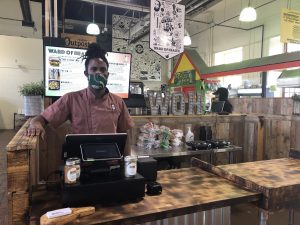 We at TheBurg hope you had a happy Thanksgiving! While you enjoy your leftover food, catch up on any news you may have missed this past week, below.

Bob’s Art Blog reviews the Susquehanna Art Museum’s exhibit, “The Modernists: Witnesses to the 20th Century.” He also has the scoop on artists to support by visiting the Millworks gift shop and studios this weekend.

Capital Region Water passed its 2021 budget and new rates, our online story reported. Utility bills in Harrisburg will be slightly higher as drinking water and wastewater rates will increase.

Christy Hoover strives to make her boutique inviting and welcoming for all. Christy Concept Jewelry at the West Shore Farmers Market has an inventory of fashion and fine jewelry. There’s something for everyone. Read more in our magazine story.

COVID-19 cases rose again this past week with an average new case count now exceeding 6,000 per day. To see the numbers by the county, read our weekly pandemic reporting.

Dauphin County introduced its $191.4 million preliminary budget on Wednesday. Despite the COVID-19 crisis, the county does not expect to raise property taxes for 2021, our reporting found.

Harrisburg-area retailers were hit hard by the pandemic, but have managed to stay afloat. Our magazine story tells of the creative ways some have found to survive.

Harrisburg’s Police Use of Force General Order was evaluated and revised over the past five months. Mayor Eric Papenfuse announced the changes, including a requirement for officers to intervene when a fellow officer is using excessive force, our reporting found.

Local businesses struggling during the pandemic have another chance to receive assistance, our online story reported. A second round of the “Neighborhood Business Stabilization Grant” that directs funds to businesses negatively impacted by the COVID-19 pandemic is coming.

Many small businesses in Harrisburg have found a unique niche during the COVID-19 pandemic. Check out our magazine story that features a food truck owner, a pair of plant lovers, a face mask artist and the owner of a food delivery service.

Mayor Eric Papenfuse announced the proposed 2021 Harrisburg general budget this week. The plan would increase expenses but does not include a property tax hike, our online story reported.

The former M&T Bank on N. 7th Street in Harrisburg may become the new headquarters for the city’s engineering and traffic departments, our reporting found. While City Council approved purchasing the building, funds for the renovation are within the 2021 budget, which will face a vote in December.

Paxtang and Penbrook boroughs’ trash may be soon collected by The City of Harrisburg, our reporting found. Mayor Eric Papenfuse proposed entering into an intergovernmental agreement with the boroughs—a move he says will pay off for the city.

Sara Bozich has your list of weekend fun! As COVID continues to spike, she encourages people to enjoy outside events or virtual ones at home.

TLC Construction & Renovations plans to build eight apartments on a vacant lot on Kelker Street. The project will provide much-needed housing to the Uptown area, our online story reported.

Ward of Health opened in the Broad Street Market, offering vegan food with a twist, our online story reported. Owner Craig Ward puts his spin on lo mein, burgers, mac and cheese and tacos, to name a few.