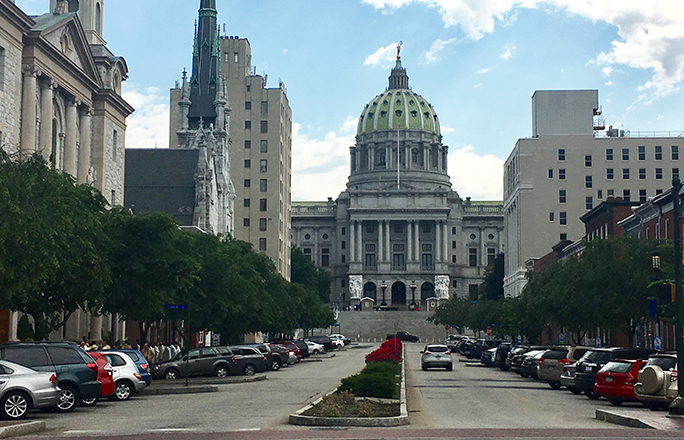 The view up State Street in Harrisburg towards the PA Capitol.

Harrisburg appears to have a long-term solution to its structural financial problems at hand, as the state legislature on Friday agreed to allow the city to extend its extra taxing authority.

Today, the state Senate, then the House, passed a fiscal code bill that will enable the capital city to retain an elevated local services tax (LST) for 15 years and permanently extend its 2% earned income tax (EIT) rate.

“Today, the legislature helped to secure a sustainable financial future for its capital,” said Mayor Eric Papenfuse. “With bipartisan support, it extended Harrisburg’s taxing authority, which will now continue even after the city exits Act 47.”

The fiscal code bill passed the Senate on Friday afternoon by a 33-16 vote, later passing the House by a vote of 108-92. It now goes to Gov. Tom Wolf for his signature.

Under the legislation, Harrisburg can retain an elevated LST rate until 2035 and its elevated EIT rate indefinitely. The LST applies to all workers who have a job located in Harrisburg, including non-residents. The EIT is a local income tax that applies just to city residents.

In late 2018, the legislature agreed to let Harrisburg continue to levy an LST of $156 a year, as well as a 2% EIT, double the regular rate, continuing taxation rates it had under Act 47, the state’s program for financially distressed municipalities. After five years, in 2023, the city was due to lose this extra taxing authority.

Without the extra tax, the city stood to sacrifice $12.4 million a year in revenue, which constitutes nearly 20% of its general fund.

The city called this its “financial cliff,” which, Papenfuse said tonight, is now no longer a concern.

“This is a monumental achievement that will positively impact the city and the region for generations to come,” he said.

Sen. John DiSanto (R-15), who supported the bill, said the measure eliminates the risk of a possible commuter tax, while allowing the city the opportunity to refinance existing debt and, after a decade, to finally exit Act 47.

“A financially stable Harrisburg is good not only for city residents, but the entire region,” he said. “I’ll continue to support policies that support this objective.”

“By working together, we accomplished what was once thought to be impossible,” he said. “We have paved the way for a fiscally sound and bright future for our residents and taxpayers.”