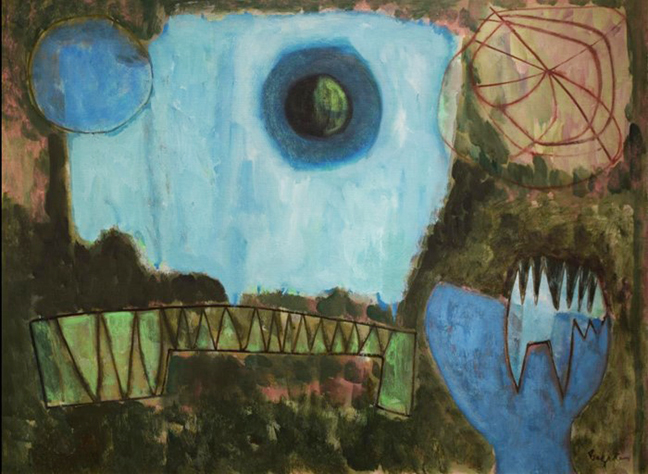 The landmark exhibit, “The Modernists: Witnesses to the 20th Century” at the Susquehanna Art Museum at the Marty breaks new ground in revealing a modern point of view felt worldwide in its approach to art.

When the curtain was raised on the 20th century, dramatic transition was under way in virtually every facet of life. During the first half of that century, inventions would include the automobile and the airplane. Revolution and political upheavals became commonplace, and the world bore witness to two major wars as well as the pandemic of 1918, which took a huge number of lives all over the globe. A blanket of pathos covered the earth over the loss of those lives.

The arena of art proved to be no exception and was rife for bold new means of expression. The realism that had pervaded for nigh on 200 years was supplanted by abstraction in its use of shapes, color and form to achieve its effect. Abstract impressionism produced a zeitgeist all its own, pushing new territories that later led to cubism, Dadaism and surrealism. These avant-garde branches of art defined the new era. Art opened avenues for political discourse and civic engagement crossing geographical divides.

Lauren Nye, director of exhibitions at SAM, has collected a survey of art from the dawn of the 20th century and pushes that forward to the early 1960s, stopping short of postmodernism in its presentation. Nye has assembled an international grouping of acclaimed artists that includes Marc Chagall, Wassily Kandinsky, Egon Schiele, Gustav Klimt and encompasses Americans Albert Bloch, N.C. Wyeth, Alma Thomas and Felrath Hines among others.

Serving as prime example is artist Hines, with his oil-on-canvas work entitled, “Church” (pictured, photo by Greg Staley). In this painting, he adeptly straddles the worlds found between realism and cubism with an overlapping of the two. The subject, a church, is recognizable as such, but cubist elements encroach in the rendering of the sun rising on the horizon. Hines came to prominence in the New York art scene both as an artist and conservator.

Pittsburgh-born William Baziotes, a painter of abstract expressionism and surrealism, was fascinated with the element of mystery found in many of his works. “Moon Forms,” an oil on canvas from 1947, tackles an icon, the moon, but his take pushes abstract interpretations to a whole new level, depicting the night sky friend as a pastiche of color, shape and intrigue. Baziotes immersed himself in both forms of art, often blurring the lines between the two in creating a universe purely of his own making.

Art exhibitions are often scheduled two years in advance, allowing lending institutions the necessary time to wrap and ship major works of art to a specific destination, albeit the museum in receipt of the materials. In addition to the art, guest speakers and consultants to the exhibit need to coordinate specific dates for in-house panels and dialogue with museum patrons. Given that Alice Anne Schwab, the executive director, and Nye could not have guessed that a global pandemic would have the world in its grip just months before its latest offering makes “The Modernists” all the more timely. The exhibit runs through May 16 in the Lehr Gallery.

Rewind the clock to 100 years ago, and the Spanish influenza of 1918 created the same deadly results the world is faced with today. These international idealists addressed social injustice on a grand scale and a global stage, much like what is now occurring. You have the basis for what artists faced then and now. History has a certain way of repeating itself. “Art, in itself, is an attempt to bring order out of chaos” wrote Stephen Sondheim. Who knows, maybe 100 years from now, there will be a new exhibit with fresh art created set against the backdrop of this pandemic, just as powerful and poignant as “The Modernists” is today.

It is said “absence makes the heart grow fonder.” Sometimes, you don’t know how much you miss something until you don’t have it. It was with great joy when the announcement was made that the Millworks would reopen on Nov. 11. A major draw, outside of eating and drinking as well as socializing, the Millworks holds a haven of artists housed within its interior. Tara Chickey, art director, now has a full roster of 41 artists that reside in 17 studios, including five new artists to welcome to the fold. New to the Millworks mix are Amie Bantz and Tristan Bond, joining Lauren Castillo in Studio 322. Phil Wells moves into Studio 213 with Lyes and Lathers. Over in 318, Reina Wooden (R76) joins artists Andrew Guth and Erik of Owl Greek Supply. Art of the Earth finds rich soil with Rachel Lowe in 214. 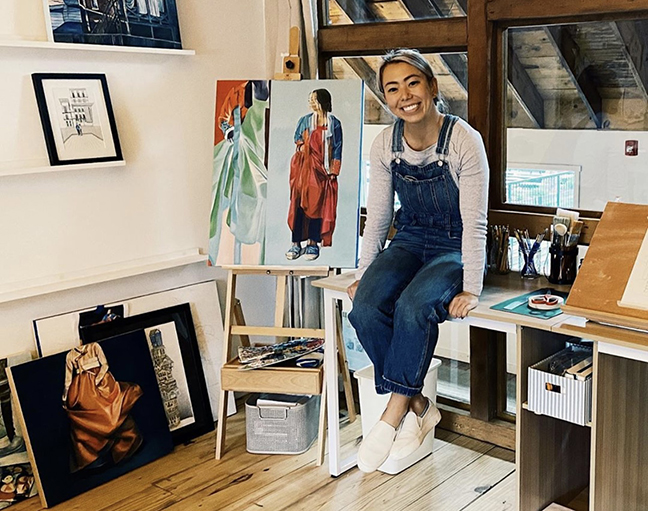 What better time of year than the holidays to shop local, support homegrown talent and to tell these artists on Small Business Saturday, Nov. 28, that they mean the world to you. And while you are supporting them, stop in and relax at the Millworks with its new fall menu of food, drinks and brews. Starting on Small Business Saturday, the Millworks gift shop, brew shop and studios will be opening at noon every Saturday through Christmas.

And if you are on the West Shore, two more veteran galleries are perfect for holiday shopping. Carlisle Arts Learning Center (CALC) at 38 West Pomfret St. is a veritable, visual and tactile feat of art with gifts galore from its members for its “Art For the Holidays” shop, which runs through Dec. 30. Be sure to stop in and meet Curator Cathy Stone and Director Becky Richeson on your visit.

Village Artisans Gallery in Boiling Springs has become an institution at 321 Walnut St. in the heart of the village. It is the dream child of P.J. Heyman. The gallery represents over 200 artists with gifts artistic and unique.