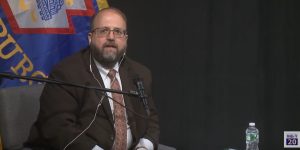 In June, Harrisburg Mayor Eric Papenfuse vowed to evaluate and make changes to the Police Use of Force General Order.

After five months of taking public comments and suggestions, he announced the changes the city has made, the main revision requiring officers to hold each other accountable.

Campaign Zero’s “8 Can’t Wait” challenge came out after the nationwide protests erupted after the death of George Floyd at the hands of Minneapolis police. The campaign urged cities to look at eight policies they could adopt, claiming they may decrease police-involved killings by 72%.

“When we did that, we discovered that Harrisburg’s use of force policy was very progressive,” Papenfuse said in another edition of Community Conversations with Mayor Papenfuse, the city’s weekly Facebook Live.

The general order did not previously include a duty for officers to intervene when they witnessed excessive force being used. While Lt. Milo Hooper said it was practiced by officers before, it is now required by the city.

“Now there’s no question,” Hooper said. “If you see something that’s not right, now you have a duty, and you’re going to be held accountable as well.”

Other changes included altering the wording for the requirement of de-escalation, the use-of-force continuum and verbal warnings to make the goal of defusing conflict even more clear. One line was added to say, “the Officer should use the minimal amount of force necessary to reduce the immediate threat.”

“We spent a lot of time talking and thinking about how we can make sure that the general order reflects the language and the message from leadership that we want,” Papenfuse said. “It’s words that translate into action, and words and language are important.”

According to the Use of Force General Order, the city does not ban chokeholds (or neck restraints, as they refer to them) as suggested in the eight policy recommendations. The document does say they should only be used as “a last resort where deadly force would otherwise be authorized.”

The city also chose not to ban shooting at moving vehicles. They did, however, say officers shouldn’t put themselves in the path of a moving vehicle, which could result in a deadly force situation.

“We don’t want anyone putting themselves in a situation where they have no choice but to use deadly force,” Hooper said.

Overall, Papenfuse said he was proud of the changes the city made to the document and appreciated the community input throughout the process.

“I’m glad the challenge was put out there, and I’m glad we rose to that challenge,” he said.

To watch past Community Conversations with Mayor Papenfuse, visit the city’s YouTube channel.