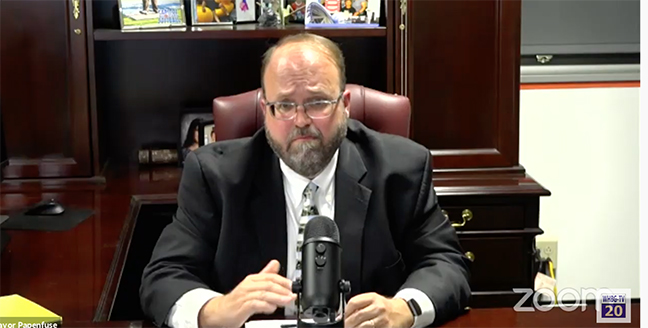 Harrisburg proposes to spend more money on public safety and debt reduction in 2021, drawing on the city’s accumulated savings to fund the expenditures.

During a virtual City Council legislative session on Tuesday night, Mayor Eric Papenfuse delivered his 2021 budget presentation, a spending plan that would increase expenses but does not include a property tax hike.

Early in the hour-long presentation, Papenfuse characterized the current, 2020 budget as challenged by a loss of revenue due to the pandemic.

By year-end, Harrisburg will take in about $5 million less in revenue than it had anticipated, largely from a loss of parking revenue, Papenfuse said. A portion of that loss was offset by $2.8 million the city received in federal CARES Act funding.

“We’re expecting a long recovery to get us back to where we were in 2019,” Papenfuse told council members.

The proposed, $79.5 million general fund and capital improvement budget for 2021 exceeds the authorized 2020 budget by about $5.2 million. Actual spending for 2020 is expected to come in far below budget, at about $66.9 million.

The city does not expect to raise its portion of the property tax in 2021, but proposes to increase expenditures by tapping its considerable fund balance, savings accumulated by years of under-spending its budget.

Under his plan, Papenfuse would draw down the fund balance from about $25.3 million currently to about $10.2 million over the course of 2021. This amount still would exceed the city’s fund balance policy, which is 5% of annual operating expenses, he said.

“The fact that we begin drawing some of that down is exactly what a fund balance is for,” he said.

Papenfuse said that he wants to use the $15.2 million to pay down debt, bolster public safety and address some infrastructure needs.

Through an agreement with the city’s bond insurer, Ambac Financial, the mayor wants to accelerate repayment of its stadium bonds and its forbearance liability, money that the city owes after defaulting on loans during its financial crisis. Doing so would save the city substantial money over the long term and also would help it refinance existing debt at a lower interest rate, Papenfuse said.

“You spend a lot of money paying down debt in 2021, but we have it,” he told council. “And then you start rebuilding that fund balance.”

On the public safety front, Papenfuse is proposing spending about $1 million to add 21 new civilian positions, including 12 new community service aides, non-uniformed personnel who would assist with “quality of life” issues and relationship-building within the community, he said.

In 2021, the city also would invest in community policing partnerships with neighborhood groups and would spend about $103,000 for the “South Allison Hill Safety Project,” a new initiative focused on such items as improving lighting, addressing blight and increasing security, the mayor said. Infrastructure priorities include replacing the failing, 60-year-old HVAC system in the city’s rundown Public Safety Building.

Notably, Harrisburg plans to expand its regional trash and recycling collection service in 2021. Last year, it began serving Steelton and, with council approval, wants to begin to collect refuse and recyclables in Penbrook and Paxtang. This would result in $2 million in annual revenues, as well as several new hires in the Department of Public Works, Papenfuse said.

In his address, Papenfuse lauded the recent fiscal code bill, which lets the city continue its enhanced tax rates. The state legislation allows the city to continue its 2% earned income tax, double the usual statewide rate, indefinitely and its $156 annual local services tax, triple the normal rate, for 10 years.

“These changes to the fiscal code resolve the most serious long-term budget issue facing the city,” Papenfuse said. “The benefit cannot be overstated.”

Lastly, Papenfuse offered a litany of road and infrastructure projects that will take place next year, which are already funded. These include substantial projects on N. 2nd Street, N. 7th Street, State Street and Mulder Square, as well as paving in South Allison Hill.

“It is going to be an exciting time to be in Harrisburg,” he said. “You’re going to see infrastructure investment throughout the city.”

Currently, the city plans two budget hearings, one on Dec. 8 and the other on Dec. 9, with a final vote expected during a special legislative session on Dec. 10.