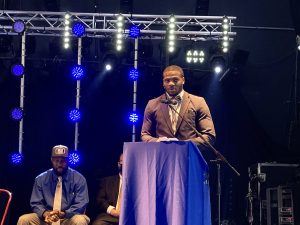 Whether you plan to hunker down at home and out of the rain or grab your umbrella and head out, start your weekend right here, catching up on this past week’s local news.

Bob’s Art Blog will take you on a virtual walk-through of Carlisle’s art and antique scene. He also previews the upcoming Odd Ones Bizarre at the Millworks, by showcasing artists involved.

Dauphin County Library System launched a $3.5 million capital campaign to renovate and expand its McCormick Riverfront Library, our online story reported. The project will entail connecting the current building to a historic home next door, the Haldeman Haly house. Other improvements will be made to better utilize space in the Riverfront library, as well.

The digital divide has been exposed across south-central PA during the pandemic. Our magazine story shares how local libraries have stepped in to fill the internet gap.

Gamut Theatre opens “Little Red Riding Hood,” a family-friendly fairy tale, this weekend. Our theater review has the details on what to expect from this goofy, musical show.

Harrisburg school board candidates outlined their priorities and goals, should they be elected, in our online story. If you’re still deciding who to vote for, this may help.

The Harrisburg School District plans to celebrate its high school seniors through a “Sign & Drive” event. They will also hold an outdoor prom and graduation ceremony in the coming weeks, our online story reported.

Jeff Haste announced his retirement as a Dauphin County commissioner this week, our reporting found. The Court of Common Pleas will appoint another Republican to serve the remainder of his term.

The job of mayor may just be one of the toughest in the country, according to our editor’s column. The responsibilities of Harrisburg’s commander-in-chief are far from glamorous and are often a grind, he writes. Read more, here.

Micah Parsons, a Harrisburg High and Penn State University alumni, received the key to the city for his football accomplishments, our online story reported. Last week, Parsons was an NFL first-round draft pick for the Dallas Cowboys.

Many pandemic-related mitigation orders will be lifted by the state Department of Health on Memorial Day, our online story reported. Businesses will be able to operate at full capacity, although facemasks will still be required.

Sara Bozich has her Weekend Roundup, including everything from live music to yoga to dining. If you’re looking for a way to celebrate mom this Sunday, she’s got you covered.

The state oversight body for Harrisburg issued a generally positive annual report on the financial condition of the city, our online article reported. The report, submitted by the Intergovernmental Cooperation Authority for Harrisburg, acknowledged areas where progress has been made but also stated places for improvement.

Susan Orlean, author of “The Library Book,” will visit Harrisburg’s Whitaker Center this month for a live conversation about her book, our magazine story reported. The event is part of the launch of a capital campaign by the Dauphin County Library System to renovate and expand its building.

Susan’s Treasures, a gift shop in the West Shore Farmer’s Market, is celebrating its 25th anniversary this month. Owners of the store are thanking loyal customers through gift giveaways and donations to local charities. Read more in our online story.

Young the Giant will rock in Riverfront Park on Aug. 27, as part of the Harrisburg University Presents summer concert series, our reporting found. The band was originally slated to play last year, but, due to the pandemic, had to reschedule.

Zeroday Brewing Co. opened a new flagship taproom in Midtown Harrisburg. Our magazine story highlights what customers can expect, from food to brews.