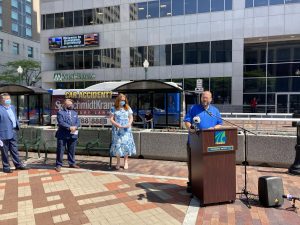 Buses rolled in and out of the Market Square transfer center in downtown Harrisburg on Tuesday, as local and state officials gathered there to discuss transportation safety initiatives.

PennDOT highlighted its recent work increasing safety and ADA accessibility at the transfer center, used as a stop for Capital Area Transit (CAT) buses at 2nd and Market streets.

“Improving transit facilities is important,” said PennDOT Deputy Secretary for Multimodal Transportation Jennie Granger. “Public transit connects people to their communities, transports them to medical appointments […] to shopping and to visit loved ones.”

Improvements to the transfer center included adding new signals and signs for pedestrians and bus drivers, installing leaning rails and new bus shelters for riders waiting at the stop, and constructing ADA-accessible crosswalks, among other small changes. Construction began last summer and was completed this spring.

“We are following the data, and we’ve already seen a great improvement in how people are crossing the street,” Papenfuse said.

Since mid-February, CAT, along with York-based rabbittransit, has offered free rides to over 2,000 people headed to get vaccinated in central PA.

“Safety is our core value,” Farr said. “Most recently, we are about the business of safely transporting our residents to receive their vaccines.”

For more information on how to travel for free to a vaccination site with Capital Area Transit, visit their website.