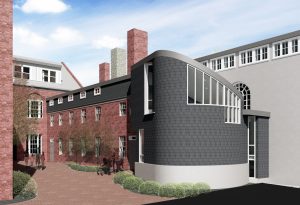 A rendering of the rear exterior of the library. The pictured staircase addition will connect the Haldeman Haly house with the existing McCormick Riverfront Library.

A sequel of sorts is in the works at one Harrisburg library.

On Wednesday, the Dauphin County Library System launched a $3.5 million capital campaign to raise funds for an expansion and renovation of the McCormick Riverfront Library in downtown Harrisburg.

The project, which is expected to begin in July, will entail connecting the current building to a historic home next door, the two-century-old Haldeman Haly house, explained DCLS Executive Director Karen Cullings. Other improvements will be made to better utilize space in the Riverfront library, as well.

“At the end of the day, it’s not really about the buildings, but it’s about the people and what we will be able to deliver out of the buildings to the community,” Cullings said at a press conference. “What we are seeking to do is create a place where everyone belongs and feels welcomed.”

The fundraising campaign kicks off this weekend with a live-streamed conversation between DCLS and author Susan Orlean, who is coming to Whitaker Center.

In a time when more people are working from home and much of education is online, Cullings still sees the need for a community space to gather, learn and work. That’s what the library plans to expand with this project.

In the main library building, the downstairs will be opened up for public use, including a new welcome center named after T. Morris Chester, a Black lawyer, soldier and prominent figure in Harrisburg history. The library will also move the current children’s section downstairs, expanding it and adding STEAM-focused elements, as well as classrooms and career development space. 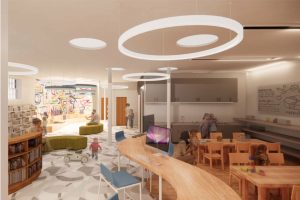 A rendering of the children’s section

DCLS is partnering with the Commonwealth Monument Project to create an area dedicated to the city’s African American history. Cullings said that they will especially highlight the Old 8th Ward, an Black and immigrant neighborhood that was demolished during the state Capitol expansion.

“Above all, we want to make sure that all we do reflects the backgrounds and cultures of those in our community,” Cullings said.

Upstairs, Cullings said that they plan to create a more open floor plan by exposing the vaulted ceiling, as well as adding moveable bookshelves, a business support area and a coffee bar.

The main building will connect to the Haldeman Haly house, which the library purchased in July 2019 for $295,000 from long-time owner, attorney William Balaban. 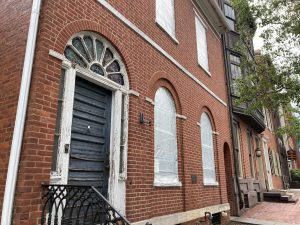 Cullings said that they plan to keep the character and layout of the historic building intact, using the rooms as meeting and event spaces for the public, as well as office space for library staff. The property also has an outdoor space and room for parking—a feature that the library hasn’t had.

The house, originally owned by Sarah Haldeman Haly, predates the library building, which sits on what once was her garden. In 1896, Haly bequeathed the property to the library system. The McCormick library became the first free public library in the city. 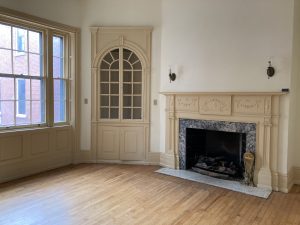 A room inside the Haldeman Haly house

DCLS hopes to continue to build on its mission of offering accessible services, expanding to include more programs for ex-offenders and those in need of workforce training.

“The city of Harrisburg has some unique challenges,” said Brandon Flood, a board member at DCLS. “I know how valuable the library is as a resource.”

Although the capital campaign, “Your Place to Belong,” is just kicking off, Cullings said that they are already halfway to their goal, but are looking for community support to reach it.

“The library is a cornerstone of the community and needs to be dynamic, growing and changing as the community grows,” Cullings said.

To donate to the “Your Place to Belong” campaign, visit the website. For more information, visit the Dauphin County Library Systems website.