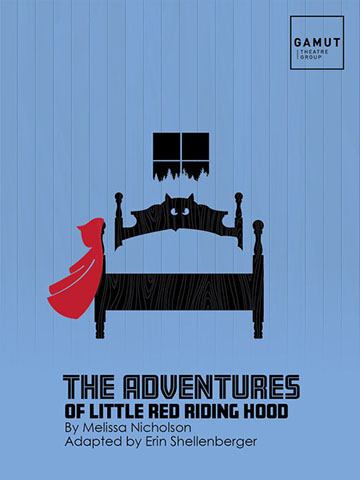 Unless you spent your childhood under a rock sans fairy tales, you’re familiar with the bare bones plot points of “Little Red Riding Hood.”

Little Red Riding Hood (Rosie Campbell) journeys through the woods by herself to visit her Grandma (Alexis Campbell). Along the way, she meets the Wolf (also Alexis Campbell), who then tries to eat the girl. At first, Little Red Riding Hood doesn’t think she can make the trip alone, but then she finds her confidence. If you grew up in a land far, far away, you may have heard a variation involving a subplot with a woodsman or a goat.

No matter which story you grew up on, you’ll meet Kyle the Woodcutter and the Goat (both played by Robert Campbell) in Gamut Theatre’s variation, adapted and directed by Erin Shellenberger. This rendition is heavy on physical comedy, musical parody and overall comical silliness.

The story starts out with the Campbell family playing themselves in their living room during the pandemic, fighting with their Alexa (voiced by Clark Nicholson). When they find “The Little Red Riding Hood” storybook on their bookshelf, they realize they don’t need a script to move the story forward.

All along her journey, Little Red Riding Hood’s ability to trust is tested. When she meets the Goat in the woods, he assures Little Red Riding Hood that, “It never hurts to have a friend in the woods.” She really wants to trust that the Wolf is good because she is running for City Council, but she soon comes to realize that shouting “Stranger Danger” is a better way to handle the Wolf.

As the family unfolds the tale, they take turns handing each other the stage for song-and-dance numbers. The best family-oriented stories have jokes for adults, too, and the generation-spanning songs are where those hilarious gold nuggets are. I didn’t catch the titles, but you can look forward to Robert crooning about a sustainable forest to the tune of a Dean Martin song, Alexis singing about her villainous prowess to the tune of Adele’s “Hello,” and a delightful soft-shoe routine by a sparkly sneakered Rosie.

The song that will stay with me for a while… Clad in a charmingly a-dork-able costume in the middle of the Popcorn Hat Kingdom, the Goat belts out a downright appealing ditty called “The Day the Wolf Cried” to the tune of “Miss American Pie.” I won’t soon forget the line containing the whimsical near-rhyme “fancy prance.”

This play occasionally breaks the fourth wall when the actors talk directly to the audience, letting us in on their private jokes and revelations. For the kids, the fourth wall crumbles under audience participation. Kids will also take away a few life lessons and a coloring page.

What must it be like to be a fly on the wall in the home of the Campbell family actors during quarantine? While the rest of us busy ourselves by downloading new apps for ordering takeout, and figuring out where to get ourselves vaccinated, Robert, Alexis and Rosie Campbell spend quality family time rehearsing amusing song-and-dance material, with outstanding results. All three actors present their audience with a playful, dynamic interplay between lovable characters—even the villains.

Spoiler alert: there is a moral to the story. And we all live happily ever after.

“The Adventures of Little Red Riding Hood” runs May 7 to 16, Fridays at 7:30 p.m., and Saturdays and Sundays at 2:30 p.m. Tickets must be reserved online in advance, and in keeping with COVID-19 protocols, will not be available at the door. There is currently a technical issue with the mobile app, so please use a desktop computer to order through www.gamuttheatre.org/lrrh or call 717-238-4111.