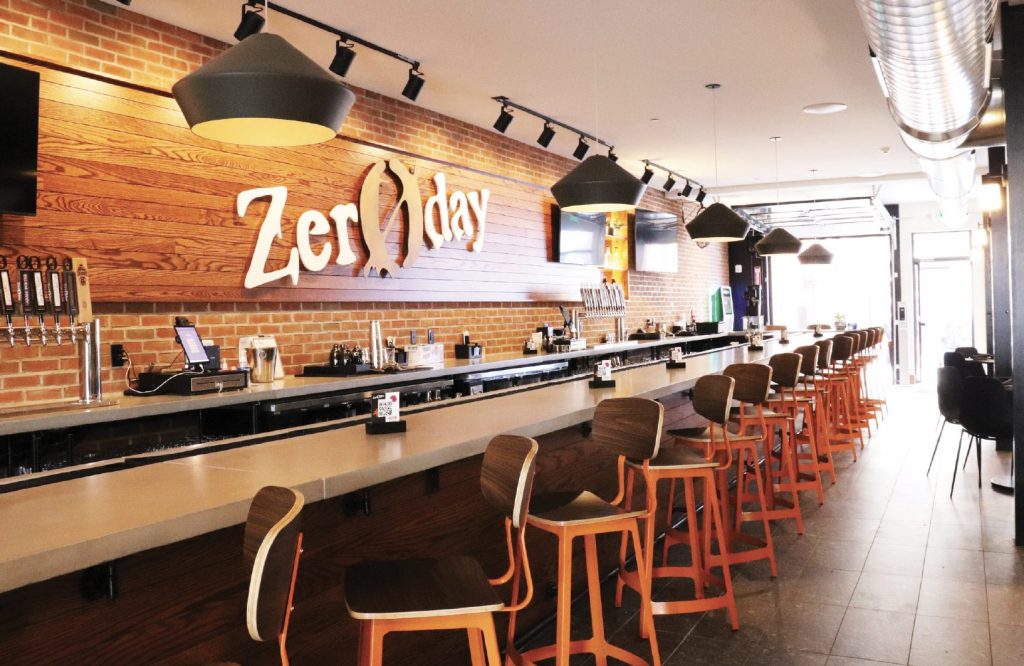 Those who are familiar with the Appalachian Trail may know that hikers have a lingo all their own. I once met a thru-hiker who informed me that her trail name was cashmere. Why?

“Because I’m a sweater,” she said, with a laugh.

Zeroday is another word that is prominent among Appalachian Trail hikers. It means taking a break and embracing the idea of doing little or nothing. Theo Armstrong wants his newest taproom, located on the 900-block of N. 3rd Street in Harrisburg, to be just that—a respite for those who need a break from the hectic pace of everyday life.

“Come in, relax, have a great beverage,” he said. “That’s what we’re all about.”

And, to that, add some tacos, enchiladas, chips and homemade guacamole because the new location has a full-service, Mexican-inspired restaurant on site.

Zeroday’s new taproom/restaurant marks the latest in its rapid expansion.

The brewery opened its first location in Midtown Harrisburg in the spring of 2015. The 5,000-square-foot space, located in back of Midtown Cinema, was divided between the brewery operations and a small taproom.

In 2017, Zeroday expanded for the first time, opening an “Outpost” inside the Broad Street Market in Harrisburg.

Then, early last year, Armstrong announced a major expansion. Zeroday would build a new brewery/restaurant on 3rd Street, near Forster Street. It also would open a second Outpost inside Midtown Cinema, along with a gourmet hot dog bar. For the trifecta, it would partner with the owners of ShakeDown BBQ for a restaurant/brewery concept in the new Susquehanna Union Green off of Linglestown Road.

Obviously, more beer would be needed, so the original taproom would be converted to production-only space.

Then the pandemic hit, and the best-laid plans came to a screeching halt—for a little while anyway.

“We started in February of 2020 and were forced to shut down construction for three months,” Armstrong said.

State-mandated restrictions further affected plans for the Midtown Cinema Outpost, which opened late last year, and, more importantly, for the taproom and eatery in Midtown.

In March, Zeroday’s new flagship location on 3rd Street finally debuted, with room for about 150 customers inside and another 60 to 70 in an outdoor courtyard, where a firepit and heaters will prolong the season when the weather again turns cooler.

A separate section can be closed off for parties, receptions, karaoke and other gatherings. That room features a small-batch, three-barrel brewhouse, so customers can have an “immersive experience” watching the brewing process and even chatting with the brewers, Armstrong said.

Especially charming are separate areas where groups of friends can socialize on comfy chairs and couches.

“We want our place to be like a community living room, where people can feel at home,” Armstrong said.

Beth Taylor has worn many hats. Some may know her as the person who oversaw the Broad Street Market’s revitalization.

“That experience told me that I can do anything,” she said.

Brew-wise, Zeroday continues its reputation for a diverse tap list, featuring numerous beer types, along with a few innovative experiments.

On tap, you’ll find such Zeroday stalwarts as the ever-popular “Mango Habanero,” a perfect fit for the new cuisine, as well as rotating selections and some one-and-done concoctions. The brewery recently released a strong ale called “COVID Ruined Our Birthday.” Believe it or not, it will remind you of birthday cake, with a kick.

If beer isn’t your thing, Zeroday has a license also to sell Pennsylvania wines and spirits.

The spirits selection includes everything from bourbon to tequila to vodka, liquors that also fortify a new line of signature cocktails that include “Raspberry Gin Fizz” and “Maple Bourbon Ginger Splash.”

Armstrong and Taylor said that the new Zeroday is off to a great start, and the team is excited that they’ve created a buzz in the heart of Harrisburg.

“We are so happy to welcome everyone back and share a beer and a great meal,” Armstrong said.