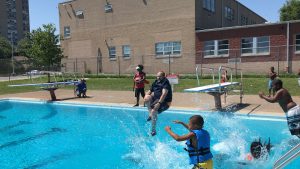 Harrisburg expects to open both its municipal pools next month in a step towards a post-COVID summer.

According to the city, the public pools at the Jackson Lick and Hall Manor housing complexes will likely open for swimming by late June.

“The city is looking forward to opening both pools this year for residents to enjoy,” said Dave Baker, the city’s parks and facilities director.

The two pools were closed for the 2020 season, due to the pandemic.

In previous years, the city has wrestled with how to keep the 53-year-old pools up and running. In recent years, both have been repeatedly patched and repaired, leading to delays and closures.  Harrisburg has considered completely renovating both pools, but decided the multi-million-dollar price tag was too high.

Harrisburg has explored more affordable options, such as replacing the pools with spray park/splash pad installations.

Nonetheless, the pools will open for the 2021 season, according to the city, which is now testing the pool facilities and training staff.

When the pools do open, COVID-19 safety guidelines and protocols will be followed, Baker said.