Part 2: July to December: Artists, Exhibits, Murals and a Special Thanks 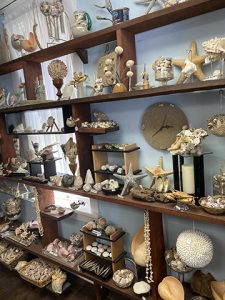 Early in July, the surf was up at the beach…in Paxtang! The Tiger Eye Coffee Company serves up three of the best items that life offers: ice cream, coffee and art all under one roof. What presents as a throwback tikibar/ice cream parlor/art gallery combined, specializes in incredible coffee and teas too. Owner Makayla Burton, 2019 graduate of Capital Area School of the Arts, has assembled a “Sweet 16” confection of artists to complement her Hershey’s Ice cream choices. Just up the street, the beach vibe continues at her father’s Harrisburg Framing and Sea Gallery et al (pictured). Rob Burton owns a way-cool shell shop and nautical decor emporium. The elder Burton brings a surf shack aesthetic to 3430 Derry St. Between the two establishments, the Burtons capture the beach scene in Harrisburg to perfection…after all, “Life’s a Beach.”

“Busted flat in Baton Rouge waitin’ for a train,” just me and Kelly McGee. Actually, the Millworks in Midtown (suite 216) houses the dream state paintings of Kelly McGee (Curran). Ancestral spirits inhabit the transitory state of her subconscious mind, and she brings those remembrances to life in paintings on pinewood slabs. The knots provide the portals between two worlds, one of the here and now and the other the shadow sanctuaries. They are the “Methods and Meanings” of Kelly McGee. 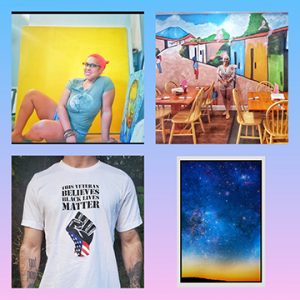 August’s 3rd in the Boro featured “The Signature Style of Pamela J. Black” and her unique wash application of acrylic paints creating highly distinctive and instantly recognizable works that can only be those of Pamela’s. From her solo exhibit at Cornerstone Coffeehouse to Café 1500 for the start of fall also found her as the featured artist in the Art zine, “Pikchur.” 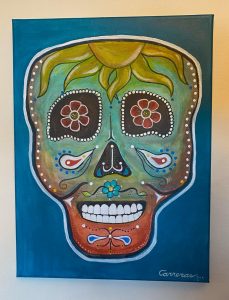 “On the Hunt for Art” brought September’s 32nd Edition of the Harrisburg Gallery Walk, which kicked off the fall scene in grand style under the auspices of the Art Association of Harrisburg’s President Carrie Wissler-Thomas. The Latino Hispanic American Community Center was a featured stop on the tour that showcased “Stars Shining Bright,” featuring Nora Carreras (whose art is pictured), Lucy Giboyeaux, Claudia Salazar and Raul Cruz. Well-wishers got to sing “Happy Birthday” to Michael Hertrich as his gallery celebrated its first full year in Midtown. Also during the month, we caught up with local baseball historians, Ted Knorr and Calobe Jackson, Jr., with “A Tip of the Cap” in homage to the 100th anniversary celebration of Negro League Baseball at the Susquehanna Art Museum. Jovana Sarver, aka dirt.petal on Instagram, took center stage on the fashion runway as model and designer of facemasks and everything else one can envision. She slayed art forms like they are dragons, fearlessly focused on the designs… proving her to be “A Polymath Petal.” 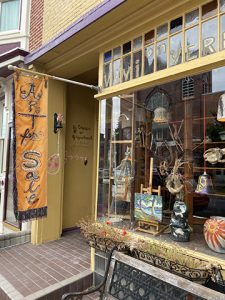 Thursday’s child “with far to go” turned out to be the executive director of SAM at the Marty, Alice Anne Schwab, who knows “The Best is Yet to Come.” She was featured in in TheBurg magazine in October. “Art of the State” local hometown heroes Andrew Guth and Ryan Spahr joined Central Pennsylvania artists Marjaneh Talebi, Shelby Wormley, Theodore Prescott, Marc Vandyke and Autumn Wright for the virtual 53rd edition of the event. A fall 3rd in the Burg took us to the gallery in Midtown where everyone knows your name thanks to the proprietors with pizzazz, Vivi Sterste and Jeb Boyd of Vivi on Verbeke (pictured). On our visit, we met Broad Street Market busker-on-trumpet and Allison Hill musician of many hats, including record producer, Jonathan Diggs Duke, a true artist with a horn.

“Bill and Russ’s Excellent Adventures” take place in a home shared by partners aptly named Bill and Russ. For as long as they have been together, their fascination with glass has filled their lovely home with beauty. Much of it “stems” from once local artist, Ona Magaro. Meanwhile, over at the AAH, the member’s exhibition was nearing its close. There, I met the youngest artist of the year, “La Petite” Estella, only 5 years old and already a whiz kid. Showing her handcrafted clay art at the Art Association complemented her ceramic bracelets at the Tiger Eye Coffee Company, where she sells colorful and quirky bead bracelets, the money all going toward her college fund. “The Modernists: Witnesses to the 20th Century” at the SAM encapsulated abstract impressionism in its latest exhibit mirroring what we are faced with today. It provides context to the societal upheaval found permeating the world in the first half of the 20th century. 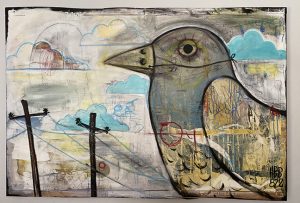 My final art blog for the year was “A Cautionary Tale,” bringing us full circle. Looking back to the first exhibit of the year afforded insight that intuitive painters Garrick Dorsett and Zack Rudy were able to see the future and in their painting from that first show of the year. “A Bird Just Being a Bird” did its best to warn us of impending calamity. The bird was wearing a mask, sharing its message for mankind to do the same.

Art Outside the Box

On Oct. 4, an art open house took place with 11 artists showing their diverse works by “staging” a residential home for sale on Verbeke Street It gave me a sense of deja vu as the core group was comprised of those from “Vacation Creation.” This grouping included paintings from Bethany Nicholle, Hannah Dobek and Reina Wooden. Photography from Larry Washington Jr. added to the mix. Among the two floors, Millworks artists Tina Berrier and Ann Benton Yeager’s paintings provided a stark contrast to the pop art of Kevyn Knox and Stephen Michael Haas, whose paintings played off each other well. Rounding out the contributors were Donny Lyons, Becky Shagin and Darian Hoke. Speaking of the Millworks, its art director, Tara Chickey, rounded up all the odd ones she could find for their annual “Odd Ones Bizarre.” The event was moved up a month this year to take advantage of the beautiful fall weather, perfect for social distancing outside on the parking lot across from the Broad Street Market. 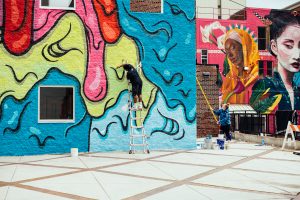 On TheBurg Podcast for December, Caruso announced with some degree of fanfare that the Harrisburg Mural Fest will return in 2021.

A Special Word of Thanks

Within every community there seems to be one person who is connected to the rest through a magical power, one which provides the conduit of information back and forth in the best sort of way. A lightning rod so to speak. For Bob’s Art Blog that person is Reina Wooden, “R76,” who keeps me informed and up to date on our local art scene, and I am in her debt. So thank you, Reina, for the scoop always. As an arts activist, Wooden participated as a panelist in WITF’s recent Zoom symposium on social justice. In addition, her painting, “The Keystone King,” is featured on the cover of the Black Wall Street PA’s current edition. The painting now resides in the office of newly elected state Auditor General Timothy DeFoor, who is the first African American to hold that position in Pennsylvania. 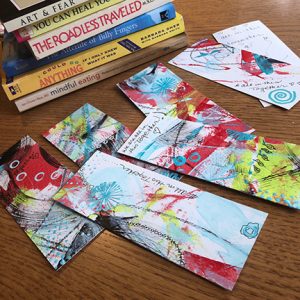 Gail Walden Coleman’s bookmarks (pictured) take a page from the phrase, “charity begins at home.” Coleman’s intuitive paintings were shrunk in size for a big cause, helping to provide meals for those in need for the Central Pennsylvania Food Bank. Aided with help from owner Rose Anderson of the Pure Gallery in Arcona, the women have provided well over 10,000 meals. What a true gift in this time of need. A heartfelt thank you to Gail and the Pure Gallery.

In the wake of the deaths of George Floyd and Breonna Taylor and so many other lives lost to social injustice, artists Michael Fitzgerald and Gary Dutson, along with friends, erected a Black Lives Matter Mural on the wall of the Harrisburg Improv Theatre as part of a national call that sweeping change desperately needs to take place. 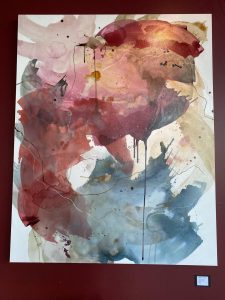 And perhaps a painting from Pamela J. Black called “The Last Word” (pictured) sums up a year that will be remembered for a long, long time. Her painting draws life from a rich mix of color blending tones, much like the master artist might. It informs the viewer that true beauty, the kind that lasts forever, resides in the space of one’s heart and doesn’t need to have the last word. That is real love in the end and provides us with art from the heart, something we can all use more of.