Sports, like most other forms of entertainment, have been majorly disrupted this year. But, a couple of weeks ago, we had box seats for a baseball “event” that knocked it out of the park.

There aren’t many opportunities to hear legends talking about legends, but the Susquehanna Art Museum (SAM) now has one for the ages—one you can view yourself thanks to Ross Tyger, who captured it all for posterity.

Ted Knorr, a local expert on the history of Negro League baseball, and the eternally young Calobe Jackson, Jr., Harrisburg’s historian of 90 years, spoke rapturously on the days of Satchel Paige, Oscar Charleston, Rap Dixon and Cool Poppa Bell. Their timely talk was held in the S. Wilson and Grace M. Pollock Education Center Gallery at The Marty at SAM, standing by paintings of those illustrious stars of yesteryear.

In a history rich with lore, the Harrisburg Giants were ballplayers solicited by Colonel William Strothers way back in 1890, long playing under his leadership. The esteemed Mr. Jackson remembers going to City Island to see the Harrisburg Giants play baseball back in the 1940s with his grandfather.

In truth, the original stars like Charleston and Rap Dixon from Steelton played their ball for The Eastern Negro League Harrisburg Giants at the West End Grounds, found at the intersection of 4th and Seneca Streets, from 1924 to 1927. Knorr and Jackson Jr. feel that that site needs to be the future home of an historical marker designating it as such, believing that this honor is long overdue.

Segregation and discrimination were the obstacles that kept Negro League players from the Majors. At 42 years old, Satchel Paige was the oldest “rookie” to play in the Major Leagues once the color line was finally broken. With SAM’s fitting tribute in “Separate and Unequaled,” the exhibit rounds all the bases with its stellar stars from yesteryear shining bright in artistic splendor.

Hitting in the leadoff slot is a portrait of Turkey Stearnes, a Detroit ballplayer, in a rich oil-on-canvas with wood and found objects by contributing artist Phil Dewey. Batting second is Graig Kreindler’s “Quiet Confidence,” an oil-on-linen painting of Josh Gibson. Artistic endeavors are also offered by Paul Kuhrman and Dane Tilghman. Anecdotal stories include the St. Louis speedster Cool Poppa Bell, who started out as a pitcher for the St. Louis Stars, staring down power hitter Oscar Charleston and “fanning” him with the bases loaded. A spectator called out from the stands, “That’s one cool poppa,” and the nickname stuck. Olympic star Jesse Owens flat-out refused to race him—Bell’s speed was the stuff of legend. To illustrate this, Bell scored from first base on a teammate’s bunt. Another tells of Steelton’s own Rap Dixon slamming the first home run by a Black player in Yankee Stadium on July 5, 1930. 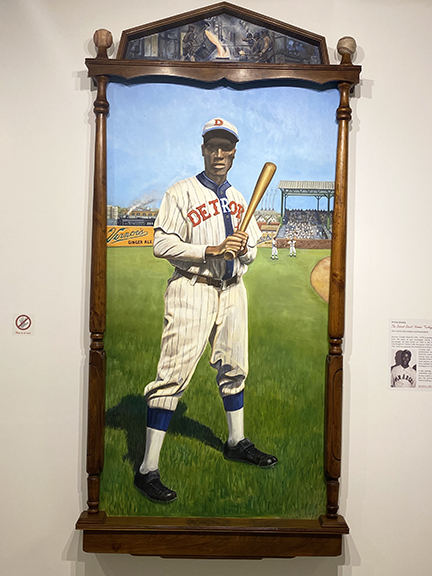 This early fall baseball classic borrows a “Paige” from its history in a new double play combination that rivals the famous Tinker-to-Evers-to-Chance. Harrisburg’s edition is Finestra-to-Jackson-to-Knorr. Behind the scenes, Carmen Finestra was largely responsible for bringing this special tribute to SAM for a live taping that can now be viewed. The double play was “turned” by Knorr asking Jackson Jr. about those days of yore through a splendid Q&A session. This edition recognizes all stars, young and old, starting with two veteran historians with 150 years combined of life experience between them. Jackson and Knorr share a passion and love for the rich history of Negro League baseball, especially that of the Harrisburg Giants. You’ll learn what tales they shared in SAM’s exhibit.

NPR’s talk show commentator, Scott Simon on his 4th of July broadcast, as part of his “Weekend Edition” show, eloquently referenced “the cruelty of segregation” in his moving tribute to the celebration of the 100th anniversary honoring Negro League baseball. The great memories made over those 35 years will live on through events like this anniversary celebration. A tip of the cap to these brave and talented men who “outplayed segregation to create something extraordinary and beautiful.” And a special note of thanks to Calobe Jackson Jr. and Ted Knorr for delivering a fastball right down the middle.

“Separate and Unequaled: Celebrating the 100th Anniversary of the Negro League” runs through Oct. 18 at the Susquehanna Art Museum, 1401 N 3rd St., Harrisburg. For more information, visit www.susquehannaartmuseum.org. The baseball interview is online at https://youtu.be/E-XwJ3W3K0U.