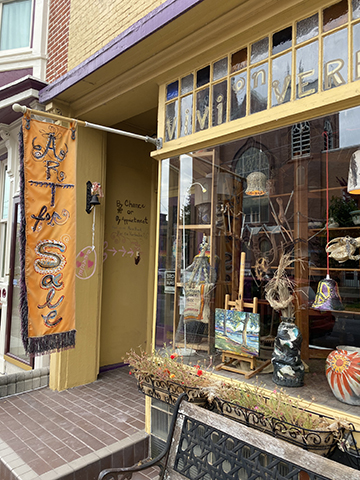 Of all the months in the calendar year, we are graced that October holds the bounty of 31 days—the month that affords great joy in its cool, crisp days after the heat of summer with the glorious colors arriving before the dark months of winter.

This October boasts two full moons, one that occurred on the first and the second a “blue moon” on Halloween. Most of October is regarded for its searing beauty, a chance to appreciate its canvas before the winds of November bring the month to a close. So, enjoy these last glorious days of the month because you’ll have to wait another full year till the next October rolls around.

Looking for some magic, we revisited a favorite haunt that holds a special place for many in Midtown hearts. There is a gallery there where everybody knows your name, and, on the off chance they don’t, they will by the time you leave. Visitors, especially on 3rd in the Burg evenings, casually drop by, drop in and invariably end up staying, feeling like an old friend before they realize it is time to close. The proprietors, Vivi Sterste and Jackson Boyd, holdovers from the Haight Ashbury generation, take time to get to know everyone who crosses their threshold. More than “peace and love,” they hold court at their own version of Versailles, Vivi on Verbeke, and everyone plays their part. Their genuine spirit of bonhomie for others is contagious in the best sort of way. They make it a priority for all who join their welcoming gallery to come in to share and relax.

Neighbors and friends amble in, as well as newcomers to the scene. On a recent fall visit, Jonathan Diggs Duke, a musician’s name if ever I heard one, graciously brought a treat for all to sample. Jonathan, for those new initiates to the Broad Street Market, busks, playing trumpet outside the market’s doors, beguiling customers to stop and listen and forget about their cares. Nicole, a new face, came in and shopped knowledgeably and with a planned purpose, finding both a piece of pottery as well as a work of art from the wall for her wall. Emmani Wright of The Vegetable Hunter in Midtown, a cook at the establishment, added a certain charm to the mix, sharing tales of derring-do about an army of vegetables ready for combat before landing on a plate. It wouldn’t be a favorite haunt without mentioning Halloween and Vivi’s virtuosic fall window dressing, which is an art unto itself. What she has achieved in the front window display is nothing short of a Tim Burton movie set with a scarecrow made out of stacked pottery. Its stick arms beckon you to drop in and stay awhile. In fact, Vivi calls her Hektate, named for a three-moon goddess. The other part of October’s charm is the chance to become a kid again when throughout the month you get to dress up and be someone else, if only for a short period of time. A suspension of disbelief is in order to enjoy the true magic of the season.

With the holidays right around the corner, the gallery is stocked with fresh offerings. So, be sure on your next visit to Midtown to drop in and say hello at the gallery. I would be remiss not to say the holidays this year will look different than in other years. Family and friends, always a priority, hold even more significance than ever. Perhaps one of the greatest gifts we can receive is that of a stranger offering a part of themselves, sharing their story. For, in the end, we all have a tale to tell; it is woven in the very fabric of our lives.

Vivi on Verbeke is located at 258 Verbeke St., Harrisburg. For more information, visit their website or Facebook page or call 717-961-9826.