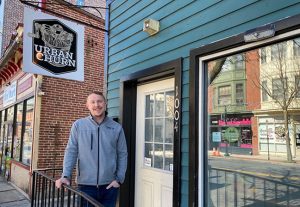 Our April issue came out this week! If the cover isn’t sping-y enough for you, our special stories focused on home and gardening certainly will be. Pick up a copy at a distribution location near you. And, if you missed any of our original reporting over the past week, we have all our stories listed and linked below.

Our Artist in Focus for March was photographer Elena Jasic. Her striking work emphasizes bold colors and brash contrasts. View her work here.

Boneshire Brew Works is opening a taproom, “Taps@SoMa,” in downtown Harrisburg at the former “Sip@SoMa.” They plan to open on April 7, offering their line of craft beer from their main facility on Derry Street, our online story reported.

CASA Pennsylvania is an organization that caters to reworking the structures that serve—and don’t serve—Black and brown immigrants, especially those from Latin American countries. Volunteers seek to provide a long-term, not a temporary, solution. Read more in our magazine story.

The COVID-19 vaccine will be available to all Pennsylvanians by April 19, the state Department of Health and the COVID-19 Task Force announced this week. They plan to accelerate vaccine distribution and increase allocations to pharmacies, our online story reported.

Darius Davis, a local artist, recently opened Midtown Art Supplies, offering a range of artistic tools to those in the community, our online story reported. He hopes his shop, located inside L&L Beauty Supply, will fill a need for artists in the area.

Development in Harrisburg has taken off recently. What has spurred on the new trend? Read about the history of development in the city in our magazine story.

Our editor looks forward to post-pandemic life in his April City View column. Although the pandemic brought suffering, Harrisburg has shown resilience, he writes.

The “Environmental Justice in Pennsylvania” symposium will take place virtually on April 6. During the event, organizers plan to establish green “hubs” throughout the state to use as places for education and collaboration, our reporting found.

The Harrisburg Police Bureau touted its success last week with taking 1,370 guns off the streets since 2015. Members of the community policing department also said they are moving forward with hiring for seven community liaison positions, our online story reported.

The Harrisburg Symphony Orchestra celebrates its 90th anniversary this year. Check out our magazine story for a look back at the orchestra’s history and to learn more about its plans for the future.

Sara Bozich has your list of holiday events for the weekend. Need something fun to do in the Harrisburg area? Check out her suggestions.

Tony Cheverez and his daughter Rosina Marie wanted to bring a taste of Paris to Mechanicsburg after a trip to the European city. They opened Chef de Crêpe, offering crepes, coffee, sandwiches and other food items, our magazine story reported.

Urban Churn Owner Adam Brackbill plans to reopen his Harrisburg ice cream shop and open a second location later this spring in the Silver Creek Plaza on the Carlisle Pike. He also has a plan to rebrand and revamp his existing shop, our online article reported.