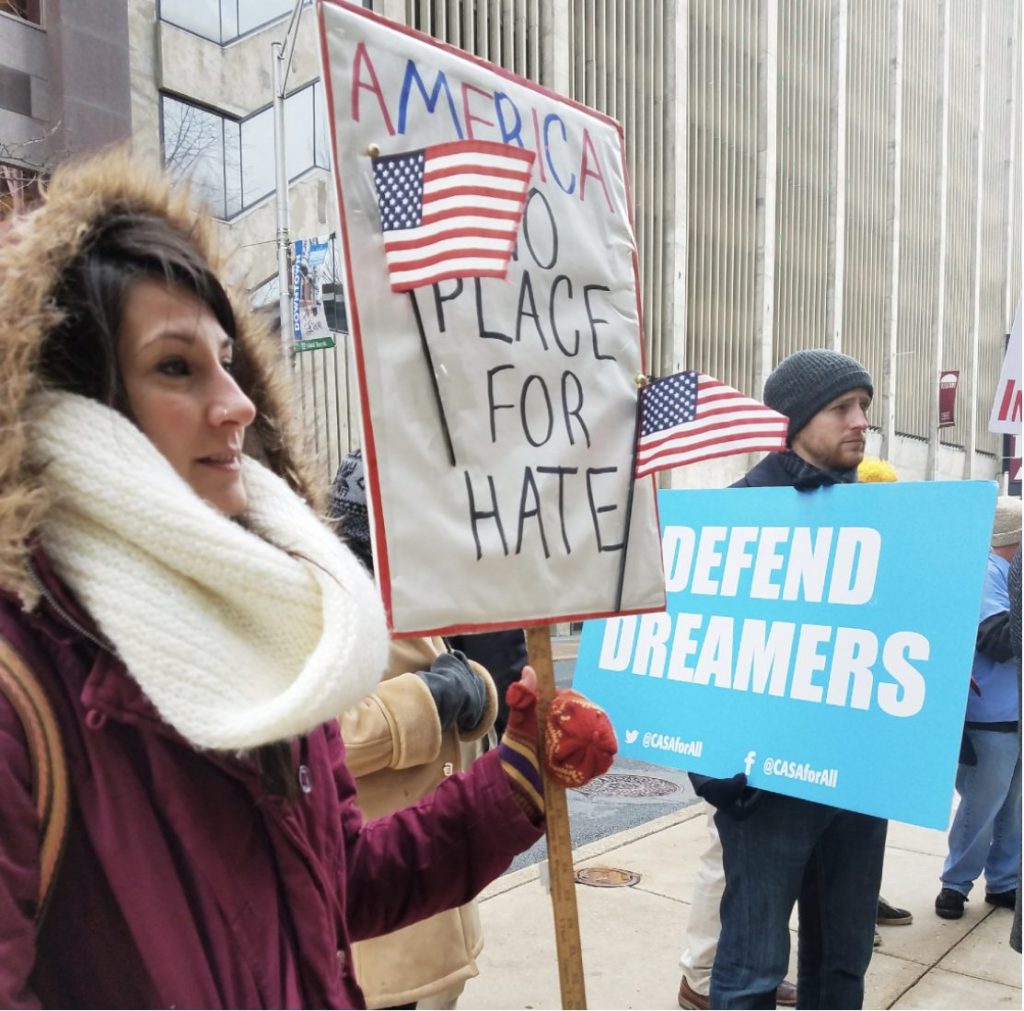 Laila Martin Garcia (left) at a recent protest in Harrisburg

“We are not a charity organization.”

That’s what Laila Martin Garcia says about CASA. Garcia is a Harrisburg-based regional lead organizer for CASA of Pennsylvania, an organization that caters to reworking the structures that serve—and don’t serve—Black and brown immigrants, especially those from Latin American countries.

“The ultimate goal is we create a structure where that is not needed,” Garcia said, of the notion of philanthropy.

That’s not to say that CASA doesn’t provide short-term support. During the pandemic, a swath of community members donated their personal stimulus checks to CASA’s Solidarity Fund, which has gone on to help more than a thousand Pennsylvania immigrant families, including some in Harrisburg.

“He lost his job, he also had COVID-19,” said Marilú Saldaña, a Harrisburg local and member of CASA, about someone she knew who received cash assistance from the Solidarity Fund. “He was able to pay his rent and buy some food at the time.”

Saldaña said that she first heard about CASA when her family was going through a hard time nearly three years ago.

“A family member was facing deportation, and we didn’t know what to do,” she said. “A friend told me about CASA, maybe I could contact them and see what our rights were.”

Today, Saldaña, Garcia and many of the more than 250 Harrisburg-area members frequently demonstrate for their rights both in Harrisburg and Washington, D.C. In fact, on Nov. 7, the CASA community organized a rally on the steps of the state Capitol. That same day, Pennsylvania announced its election results, which favored Democrat Joe Biden. Meanwhile, then-President Trump’s supporters showed up to the Capitol by the busload.

“They were very noisy, but we were ready, and we were in power,” Garcia said. “We had the permit.”

It took time for the police to get organized, but they ultimately led the Trump-supporting protesters away from CASA and around the back of the building.

“I’m gonna tell you something,” Garcia said. “It was scary. I remember arriving, and the police had to make a corridor so we could go through.”

But, as Garcia made sure to emphasize, go through they did.

The recent presidential shift provides renewed opportunity for immigrants in Harrisburg to secure legislation. With weekly trips to D.C., CASA staff and members are not letting a potential moment for change pass them by.

Between mobilizing, CASA helps educate and assist immigrants on their rights in this country. They develop new systems, too. There’s the Worker’s Development Program, a similar type of guidance to PA CareerLink, yet suitable even for those who don’t have a Social Security number.

That’s the real juice of CASA’s work—not just working through the systems that currently exist for immigrants, not just placing bandages on wounds that will only continue to fester, but working to redefine what it means to be an immigrant in and out of Harrisburg.

CASA has worked with the state police to help loosen their ties to U.S. Immigration and Customs Enforcement. They’ve developed a quadrilingual hotline for immigrants seeking guidance during the economically trying pandemic. And moving forth, the Harrisburg leg of the organization will be endorsing political candidates chosen by CASA members themselves.

Those members pay a $40 annual fee, which Garcia says helps keep people committed in the fight for long-term systemic change.

Garcia has been in Harrisburg for 4½ years. When she first arrived, she was undocumented with a 1-year-old child.

“I just didn’t have the strength I think at that moment to give myself to the community,” she said.

But, like Saldaña, Garcia’s involvement with CASA has been familial and invigorating. Each demonstration, each obstacle, each step forward has fed her.

During the pandemic, Latinos in the United States have experienced higher COVID-19 infection rates, as well as higher unemployment rates, according to Pew Research and the U.S. Centers for Disease Control. Despite that, CASA and other activist organizations have continued to remain committed to their cause.

“We see it now with COVID, all the essential workers,” Garcia said. “Marilú’s husband is working during the pandemic. We know that this country needs us as much as we need this country.”

For more information about CASA Pennsylvania, visit www.wearecasa.org or their Facebook page.