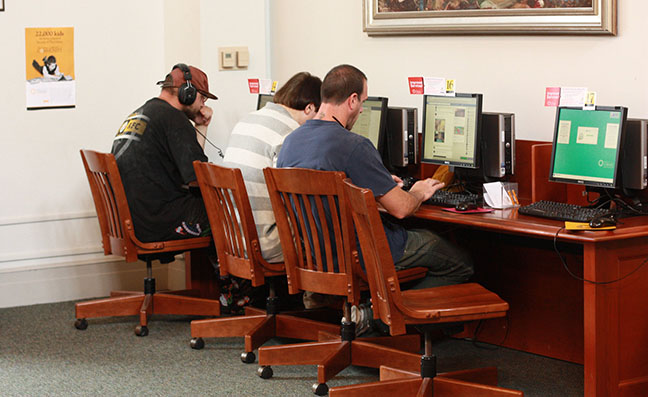 Every morning, people are waiting in line outside Harrisburg’s three libraries.

They wait in line because they need to get online.

“What we’re seeing now, entering this pandemic recovery mode, is that computers continue to be a lifeline for the community,” said Karen Cullings, executive director of the Dauphin County Library System (DCLS). “During normal times, we provide people with access and help them with issues, but there are even more of them right now.”

The problem is, computer access is at a premium.

Only 49 of the library system’s 128 traditional desktop computers are currently online. Due to social distancing guidelines, the remaining 79 computers are blocked off, with their screens remaining dark on a daily basis.

Laptops are somewhat of a stopgap—32 laptops are available for use within the libraries. Some of them were recently purchased thanks to funding from Dauphin County’s gaming grants.

But additional funding—between $40,000 to $50,000—is needed to reconfigure the layout of the PCs, Cullings said, not only to allow for safe social distancing, but for privacy reasons as many users enter personal, sensitive and medical information into their searches and applications.

Cullings is hoping DCLS can plug into federal, state or local COVID-19 grant funding—or a combination of those sources—to bring the otherwise unused computers back online.

If funding isn’t secured and reconfiguration doesn’t begin soon—some of which involves lengthy processes such as cutting through masonry in order to move electrical wiring—Cullings fears libraries won’t be able to meet residents’ escalating need for computer access.

“I believe good news is on the horizon thanks to the American Rescue Plan [recently passed by Congress],” said Glenn R. Miller, deputy secretary and commissioner for libraries, under the Pennsylvania Department of Education. “In that plan, there are a number of programs—one that speaks to this specifically is a connectivity fund–$7.1 billion—through the Federal Communications Commission.”

Miller believes guidelines for the relief program will be available in early May, followed by an application period for libraries and schools by early-to-mid-summer.

“In terms of vaccine appointments, the bad news is, it might not be soon enough for that [increased computer access],” Miller said. “But it’s still going to solve a lot of problems.”

According to the most current (2018) data, 83% of Dauphin County households have internet access. That leaves 17%–or nearly 19,000 households—disconnected.

“We knew the problem was there but the pandemic has accentuated the magnitude of it,” Miller said. “It’s highlighted the disconnect between the haves and have-nots, specifically around digital access… it’s having a more profound impact on kids and families who are in more disadvantaged economic circumstances.”

County agencies such as Dauphin County Human Services, along with area pharmacies, are referring residents without internet access to the libraries for computer access. Which puts DCLS in a tight spot that is only getting tighter.

“We’re trying to make it work, with what we have,” Cullings said, “And we’re very eager to help residents because we know the need is great, but as the vaccine rollout increases, we may have to go to an appointment-only arrangement [for computer use].”

DCLS recently lifted the one-hour time limit previously imposed upon library computer use, because many of the relief applications and searches are taking users longer than an hour to complete.

“This is a time of big transition,” Cullings said. “We recognize that public libraries are not just access points but part of the cultural fabric of our community, and we’re going to have to work through these issues such as equitable technology.”