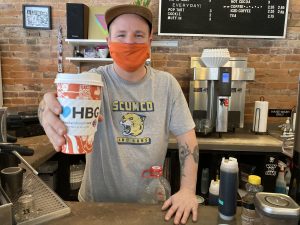 Local cafés have teamed up with Bethesda Mission for their #iheartHBG campaign.

A snowstorm may have blown into Harrisburg to kick off the week, but the sun came out to welcome the weekend. Go for a walk, enjoy the weather while it lasts and catch up on the news, listed and linked below.

An affordable housing incentive program for city developers was proposed at a Harrisburg City Council meeting on Tuesday. The drafted bill would offer things like tax abatement and zoning relief to developers that include affordable units in their plans, our reporting found.

Our Artist in Focus for February is Dionn Reneé who is skilled in everything from photography to graphic design, but it’s her fine art that we’re highlighting this month. Click here to take a look.

Bethesda Mission launched its #iheartHBG campaign to raise awareness and funds for the work they do in the community, our online story reported. People can stop at local cafés through February and find a coffee cup sleeve with the hashtag on it.

A condo building and a potential affordable housing project in Midtown Harrisburg have both received key zoning approvals from the city. A local developer wants to build the condos in the former Salvation Army building at Green and Cumberland streets, our online story reported.

Doggie Delights, a vendor at the Broad Street Market, enjoyed community support after the owners’ storage barn for their business burned down. Two GoFundMe pages for the family have already received numerous donations, our online story reported.

DTLR/Villa has moved down the block for several months into 309-311 Market St., the former location of the downtown Rite Aid store. Harristown Enterprises, the owner of both locations, stated that the national fashion and sports apparel retailer is expanding its store at 333 Market St. from 4,000 to 7,000 square feet, our online story reported.

Harrisburg provided free parking in the Locust Street Garage during the snowstorm earlier this week, our online story reported. The city also deployed 16 trucks to assist in snow removal.

How Harrisburg are you? Our editor has put together a list of 50 “very Harrisburg” things that residents or even visitors to the city can check off. You’ve swallowed a gnat while running/biking on the riverfront? Two points! Picnicked in Reservoir Park? Another two!

Otto Banks, a former Harrisburg City Council member announced his run for mayor, joining an increasingly crowded field of candidates, our reporting found. Banks said that he intends to run for the Democratic nomination.

Reading a book has become the perfect pandemic pastime, our magazine story reported. It’s also a great way to take a break from the screen and prevent eye strain, which eye doctors have seen as a growing concern.

Sara Bozich has some Super Bowl weekend food ideas to make or order. Not into football? She has plenty of other fun ideas for your weekend.

The Soul House Café in Allison Hill recently moved to a larger location at the corner of 17th and Paxton streets. Our magazine story highlights owner Andre Young and his resiliency, despite setbacks with the business.