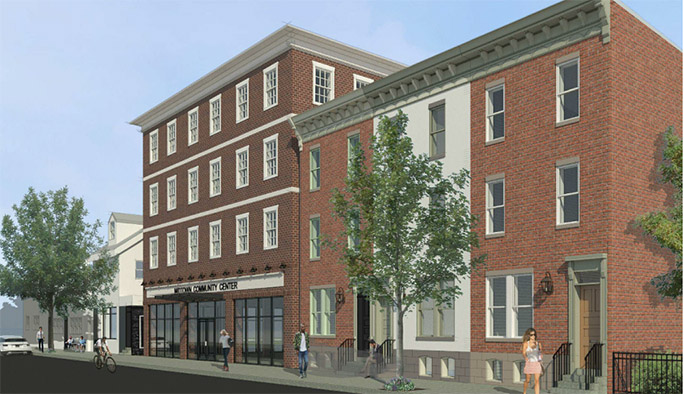 First, the commission unanimously approved a zoning variance and special exception for a proposal by Midtown Redevelopment LP to build a 12-unit apartment building, along with a community center, on the 1600-block of N. 3rd Street.

The project also includes eight single-family townhouses, with built-in garages, at the rear of the site fronting Logan Street.

Most of the discussion centered around the 18,000-square-foot, three-story apartment building, which would include a mix affordable and market-rate units, according to the company’s partners, Chris and Erica Bryce of Harrisburg and Matt Long, owner of Harrisburg Commercial Interiors.

The building would be built on the site of a long-time community garden, land currently owned by the Harrisburg Redevelopment Authority. The developers said that they would retain the garden but move it to another area nearby. The project also envisions a 4,180-square-foot community center on the first floor of the apartment building.

Long said that the community center idea originated after discussions with the community last year during a neighborhood presentation.

“One of the most recurring themes was that a community center was lacking in Midtown,” he said. “We want to meet the needs of everyone there.”

The developers currently have set aside nine parking spaces on site for the apartment building, but said they would arrange to have parking for each unit. The Logan Street townhouses would be built with their own garage parking.

“Overall, I’m really pleased with the type of residential housing that is being proposed with this application,” said commissioner Anne Marek. “It’s really nice to see a mixture of not just more apartments but also town home development with the garages.”

A rendering of the proposed town homes on Logan Street.

The project now moves to the city’s Zoning Hearing Board for final approval for the variance and special exception. It also must get land development plan approval from both the Planning Commission and City Council.

“I support this project,” said Rich Gribble, a resident who lives nearby on Harris Street. “It looks really exciting to me. And I hope to come up and be a member of the community center.”

Next, a development partnership led by Philadelphia-area businessman Kevin Baird presented a large proposed project at Reily and Fulton streets.

Under the current configuration, the building would rise seven stories. The apartment portion would include 20 units per floor: six studios, 11 one-bedroom units and three two-bedroom units.

Baird said that the retail portion would be dominated by a grocery store and could also include a restaurant, a café and office space. He added that the parking garage is needed to serve the new federal courthouse a block away, as well as provide parking for the Midtown community.

A rendering of the proposed apartment building and parking garage at Reily and Fulton streets.

The courthouse, at N. 6th and Reily streets, is slated for completion in late 2022, but will have scant parking on site. The federal government anticipates needing more than 500 additional spaces to serve the building.

The developers and commissioners had an extensive discussion about parking legalities, as the site sits within the “no compete” zone under the city’s long-term parking asset lease with the commonwealth.

The developer said that it has an “agreement in principal” with the commonwealth and its asset manager, Trimont, on the issue, which would allow the parking garage to proceed.

“It’s just a question of getting all the stakeholders around the table to agree, and working out the final parts of the agreement,” Baird said. “It’s going to get done.”

The commission approved a variance and special exception for the proposal. This project also now will proceed to the zoning board for final approval and, separately, must have its land development plan approved.

“It’s good to see a project of this quality,” said commissioner Vern McKissick. “It’s definitely what’s happening in other cities around the country.”

Thirdly, the commission approved a variance for the “Carpets and Draperies” building on the 1500-block of N. 3rd Street. City resident Nate Foote has proposed creating a five-unit apartment building from the long vacant, blighted building.

Foote said that other nearby projects, such as those on the planning commission’s agenda on Wednesday night, inspired him to take on the renovation, as he lives in the neighborhood.

“I saw what was happening at the 3rd and Reily corridor and thought it would be a terrible tragedy if this building wasn’t brought back to life at the same time those things were happening,” he said.

A rendering of the 1500-block of N. 3rd Street after the proposed renovation of the “Carpets and Draperies” building

The project does not include parking on site. Foote said that he planned to lease parking in the area, which has several nearby surface lots.

With this approval, Foote likewise now must have the variance approved by the Zoning Hearing Board. The commission on Wednesday also approved the project’s land development plan, which must also be approved by City Council.

Foote mentioned that he’s under some time pressure to have the project approved because his sales contract for the building expires next month.

“I think this is a great project,” said commission Chair Joe Alsberry. “We’ve received a lot of support for it.”

These projects all must be approved by City Council, as well. 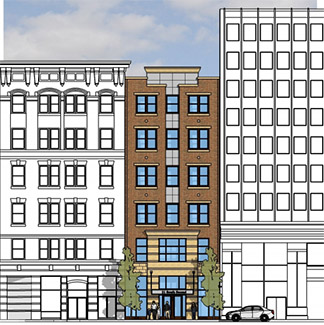 Finally, the commission unanimously approved a land development plan to build a mixed-use building downtown at 21 S. 2nd St. A partnership led by Harristown Development plans a six-story building consisting of retail and office space on the bottom two floors, as well as eight apartment units on the upper floors (see exterior rendering).

This site, currently an empty lot, once housed a small, blighted commercial building that included the Coronet restaurant on the first floor. Harristown razed the building after buying it in 2017.

That project also now must get City Council approval before breaking ground.

“We’re excited about the project,” said Brad Jones, Harristown’s president and CEO. “We’re looking forward to doing this new construction here in the next year or so.”