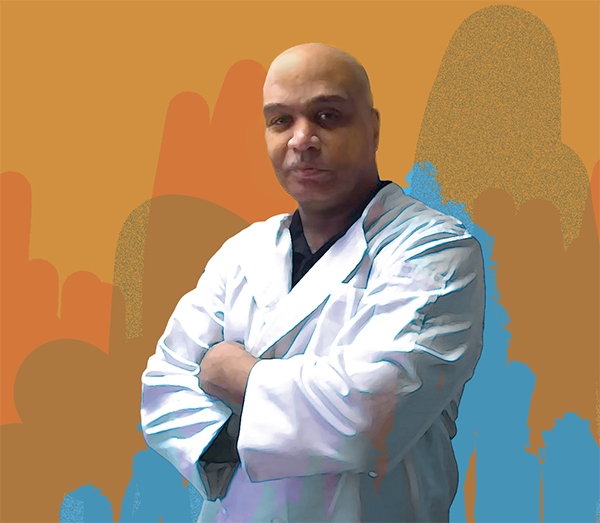 “Pivot” is a big word in the restaurant industry these days. Restaurateurs have been forced to change—and change again—in response to the COVID-19 pandemic.

Andre Young is no exception. The owner of Soul House Café has learned that, to succeed in life, one must be resilient—a philosophy that has served him well over the years. Each time he suffered a setback, he figured out a way to emerge victorious.

This time, he decided that he wasn’t going to allow a pandemic to stand in his way.

When COVID hit, his Harrisburg restaurant was forced to shut down twice, once in April at the onset of the pandemic and then again on Halloween.

It was then that Young realized it was time to take action. So, after five years at 19th and North streets, he moved to a larger location at the corner of 17th and Paxton streets.

“In the previous place, there was a very small lobby and no waiting area, except a deck, where people would wait for their food,” he said. “With the cold weather approaching and social distancing, it forced my hand.”

Young credits his mother for his profession, saying that she imbued in him a love of cooking.

Years later, when he became a single parent, he decided it was time to go back to school to study the related field of hotel and restaurant management. After working at Red Lobster and subsequently helping to train staff at various locations, he realized that he had a yearning to return to his hometown.

“I was in Norfolk at the time and came back to intern at the Maverick,” Young said. “A nightclub operated there in the evenings before a fire took it out.”

He then opened Off the Hook on 17th Street, where he served up heaping helpings of soul food, much as he does today. He ran the eatery for four years, until the Great Recession put him on the ropes.

“I couldn’t withstand the rise in gas and food prices,” he said.

Several years later, he decided to take another shot at running a restaurant, benefitting from all he had learned over the years.

Over time, Soul House Café became very popular, often with customers waiting in long lines for their orders. COVID, though, presented a big problem due to a lack of space inside. So, Young decided to move into a larger building on Paxton Street, where social distancing was easier and people could duck in from the cold to wait for their meals.

“We closed down during the month of November to make the transition,” he said.

The Soul House Café menu lists traditional southern cuisine, but with many twists.

A variety of chicken wings are on offer, with a choice of sauces, like the popular “mumbo” sauce, which, Young explained, was created in Chicago and gained popularity in the Washington, D.C., area.

“It’s a sweet and tangy sauce, with a little kick,” he said.

An array of wraps is also available, like the signature whiting fillet, deep fried and wrapped in a flour tortilla, or the Buffalo chicken wrap with grilled or fried chicken, tossed in sauce and blue cheese and served with a choice of toppings. Additional handhelds include cheeseburgers and chicken breast sandwiches, along with sandwiches that focus on seafood, such as the popular whiting and catfish.

A selection of hot subs is also available with ingredients like sausage, steak and chicken.

Customer Dawn Johnson said that Young was a former classmate and became the “go-to caterer” at her workplace. Among her favorites are the fried shrimp dinner, roasted chicken, macaroni and cheese, greens and rice and gravy.

“I used to run the Harrisburg Packers midget football program, and he did all the cooking for me at our concession stand,” Blackston said.

His favorite dishes are the deep-fried shrimp and fries, the macaroni and cheese, and the greens and sweet potatoes. Blackston also mentioned how popular Young’s restaurant is.

“I’ve been to the new place three times, and each time there was an hour wait,” he said.

Marlon Anderson comes in from Steelton to grab and go, with the Cajun catfish dinner being his favorite.

Anderson likes that every dish is cooked to order.

“It’s fresh and doesn’t sit under a heat lamp,” he said. “Plus, the service is good and everyone has a great attitude.”

He added that the new place is an improvement over the old.

“It’s bigger inside,” he said. “In the other place, there was no seating inside.”

As for Young, he’s looking forward to how things will play out in the new year in his improved digs.

“COVID is making the decisions right now,” he said. “For now, we’ll do takeout until vaccines get more widespread and the fear subsides.”

Until then, he’s “playing it by ear.”

“You gotta have a love for it,” he said.